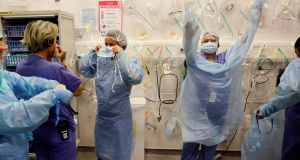 The Minister told the HSE he wanted it to carry out a ‘thorough audit’ of its systems and controls concerning sourcing, management and usage of personal protective equipment. File photograph: The Irish Times

Minister for Health Stephen Donnelly has instructed the Health Service Executive to carry out an audit of how it buys, manages and uses personal protective equipment (PPE) for healthcare staff on which it will spend close to €1 billion this year.

The move follows serious concerns within Government over several months that the HSE was not following official rules governing such expenditure. The Department of Public Expenditure maintained that at one stage earlier this year the HSE had spent about €120 million on PPE over and above the amount sanctioned by the Cabinet.

8 Covid-19: New challenges for Ireland’s response in ‘year of the variant’

9 The future of Covid-19 in Ireland: Best-case, worst-case and even-worse-case scenarios

10 When a ‘good father’ decides to kill his whole family

15 Maureen Dowd: Many on the left don’t understand what a reporter is

18 Dylan Moran: ‘Smoking or breathing, one of them had to go’

22 Gardaí contacted one of brothers before Cork murder-suicide

23 Great Escapes: When Daniel Day-Lewis became king of the ring

25 Spring clean: 13 ways to spruce up your home – with or without a tradesperson

28 Barry Gibb: ‘My brothers had to deal with their demons, but my wife wasn’t going to have it’

30 Will daughter get CGT exemption for renting home in 2014?

31 TV View: No need to feel sorry for England, but if it was any other team

32 Chris Johns: Era of free money could be coming to an end

35 TV guide: 25 of the best shows to watch this week, including tonight

38 Covid-19: Six more deaths and another 612 cases confirmed in the State

40 Six Nations talking points: Garry Ringrose has his mojo back