The HSE have taken delivery of nine ultra-low temperature freezers at the National Cold Chain Centre. Each unit can store between 175,000 and 200,000 Pfizer BioNtech Covid-19 vaccine doses. Video: Barry Cronin 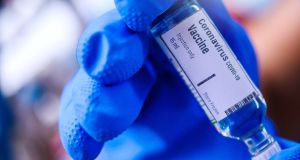 Plans around the vaccine rollout are to be finalised

Hospitals and nursing homes will be prioritised for rollout of the Covid-19 vaccine under plans to go to Government on Tuesday.

The primary initial focus of a vaccination campaign against the virus will be healthcare workers and nursing home residents, according to the “sequencing” plans drawn up by the Health Service Executive.

The plans say experience gained from existing vaccination programmes will be vital in ensuring the success of an immunisation programme for Covid-19, as will effective communications to “win hearts and minds”, according to a source familiar with the document.

With the first Covid-19 vaccine due to be administered in Northern Ireland on Tuesday and the plans for vaccine rollout in the Republic due to be published later this week, there will be intense focus on the detail of the Government’s proposals.

The Department of Health on Sunday acknowledged the level of speculation around which groups will be prioritised but said no decisions had been made. This will not happen until after the Government’s vaccine rollout taskforce reports next Friday, a spokeswoman said.

In another pandemic milestone, the number of tests carried out passed the two million mark at the weekend.

Pharmacists have called for the profession to be allowed to play a central role in the vaccination drive for Covid-19.

The Irish Pharmacy Union said its members were available to support the national effort, but warned against a repeat of the “mistakes” made in distributing the flu vaccine this autumn.

IPU secretary general Darragh O’Loughlin said that, after months of restrictions, the Government owes it to everyone to roll out the vaccine “as quickly and seamlessly as possible”.

“A safe and effective vaccine could arrive within weeks, but it will still take time and meticulous planning to ensure a comprehensive vaccination programme is rolled out.”

Relying solely on GPs to vaccinate the population could potentially cause delays in diagnosing other illnesses, he suggested.

Meanwhile, the Government has ruled out the creation of a new role of “minister for vaccines” with the specific duty of overseeing the rollout.

Calls had been made from some political and health quarters for the creation of such a role, and the Taoiseach did not wholly rule out the possibility when speaking in the Oireachtas.

However, Micheál Martin’s spokesman said on Sunday there was no plan for a specially designated vaccines minister, noting that the vaccines taskforce chaired by Prof Brian MacCraith had been set up to report to the Taoiseach.

Urging politicians to “roll in behind” the public health experts, Minister for Science Simon Harris said on Sunday there was “no room for pseudo science or scaremongering” on the vaccine.

Referring to reports of some TDs saying they would not be taking the vaccine for different reasons, he told RTÉ’s The Week in Politics: “This has to stop. . . We have to listen to our doctors, the same people who have steered us through this pandemic.”

Meanwhile, significant differences of opinion among public health officials over the approach to controlling the virus after Level 5 restrictions have emerged in newly published minutes of the National Public Health Emergency Team.

Minister for Transport Eamon Ryan admitted there was a “reasonable probability” of a third wave of the virus in January or later in the new year.

But he said “flight-shaming” of people coming home for Christmas was “not appropriate”.