An estimated 20,000 to 50,000 people in Ireland chronically infected with the disease 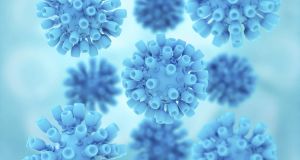 A 3D rendered illustration of a hepatitis virus. There are an estimated 20,000 to 50,000 people in Ireland chronically infected with hepatitis C. Photograph: iStock

Anti-viral drugs that can cure Hepatitis C are to be provided to an additional 1,500 people with the disease, the HSE has announced.

The drugs, which can cure 90 per cent of cases, have already been used to treat 700 people with severe Hepatitis C.

The HSE said it is extending the clinical eligibility to Directly Acting Antivirals (DAAs) as part of the next phase of a plan to eliminate Hepatitis C in Ireland by 2026.

Some €30 million has been made available for the plan, which has been welcomed by Minister for Health Simon Harris.

“Expanding the programme will enable more people to get that chance at a cure, improving their lives immeasurably, while also helping free up scarce resources in our hospitals.”

The hope is that all patients who got the virus through contaminated blood will have started the treatment by the end of next year, he added.

Consultant hepatologist Professor Suzanne Norris expressed delight “that we are now in a position to offer this extremely effective and successful drug treatment to more patients”.

“It is not often that we say we can cure a patient of a disease but these new medicines offer the chance of cure in excess of 90 per cent of patients who complete a course of treatment.”

Before the development of the new treatments, as little as 50 per cent of Hepatitis C cases could be cleared with the available drugs, and the rate was lower in patients with cirrhosis.

An estimated 20,000 to 50,000 people in Ireland are chronically infected with hepatitis C, more than half of whom are not aware of their infection.

Some 14,500 people have been tested and clinically diagnosed with hepatitis C since it became a notifiable disease in 2004. However, research has found that the disease could affect up to twice that number with 700-800 cases being notified each year.

Most people with hepatitis C have no discernible symptoms, with just non-specific signs such as general fatigue. People can live for decades with the virus before health complications arise.

About 70-80 per cent of those with the virus develop chronic liver disease, while 20-30 per cent develop cirrhosis of the liver, which tends to appear after two or three decades. Patients who develop cirrhosis from hepatitis C are more at risk of developing liver cancer.