Analysis: Taoiseach says any claims projects would be cut were ‘scandal-mongering’ 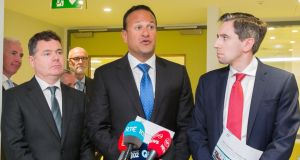 It was understandable, perhaps, that Taoiseach Leo Varadkar and his Ministers chose not to launch the Health Service Executive’s €2.1 billion three-year capital plan at the site of the new national children’s hospital.

Even though half the Cabinet had decamped to a newly-refurbished National Rehabilitation Hospital in Dún Laoghaire for the announcement yesterday, the project over at St James’s Hospital continued to cast a long shadow.

The massive cost overrun at St James’s, where the cost of building the children’s hospital has jumped from €900 million to €1.7 billion in two years, continues to hang as a millstone around the Government’s neck.

Aside from the insult it constitutes to the administration’s reputation for good fiscal housekeeping, the ever-rising bill for this project poses a practical problem: how can a health service urgently needing investment fund any other projects when it faces such a prolonged and massive drain on its resources?

It has taken nine months into a three-year plan for Ministers to agree a capital plan which, they say, is proofed against the cost overruns at the children’s hospital.

Anyone who said otherwise, by claiming projects were going to be cut, was “scandal-mongering” and telling stories that were “fake” and “made up”, a combative Taoiseach added.

Which is strange, really, as it was the HSE itself that warned earlier this year that it would be impossible to deliver investments in healthcare because of the budgetary problems over at the children’s hospital.

Meanwhile, Minister for Health Simon Harris was telling colleagues in a confidential Cabinet memo last December that spending on a number of major projects could be “halted or significantly curtailed for up to four or five years” because of the same issue. One could hardly blame the Opposition for taking up the ball and running with this, especially as the delay in publishing the plan persisted.

The Government’s line is that Minister for Public Expenditure Paschal Donohoe this summer found an additional €200 million, which will be used to fund the children’s hospital and broadband projects.

But with the children’s hospital needing an additional €100 million-plus each year for four years, it is far from clear where all the deficit is to be made up. The capital plan, which lacks detail and uses woolly language – the word “progressed” is used more than 25 times in relation to projects – does not provide the answer.

What is clear is that the Government’s 10-year capital spending plans for health are not front-loaded, as Harris and the HSE wanted them to be. Spending of €642 million is envisaged this year, out of a €10.9 billion, 10-year plan.

This is an improvement on the €567 million quoted at Cabinet last December, and the projects listed as being threatened in that memo appear to be going ahead now.

Although most of the items in the plan have been well trailed, some are relatively new, such as the promise of three new elective-only hospitals in Dublin, Galway and Cork.

And despite Brexit and the global economy casting their own shadows on economic planning in Ireland, the Taoiseach stressed that Ireland is running a surplus and is therefore well placed to continue investment even when financial conditions grow more difficult.

Taxi industry ‘will not cope’ with Christmas rush after driver exodus 19:15
Coronavirus: 13 further deaths and 456 new cases reported in the State 18:07
Garda seriously injured in hit-and-run on M1 motorway 17:35
Women ‘left in poverty’ due to welfare system built around ‘male breadwinner’ 16:47
Man and woman arrested after gardaí find €53,000 worth of drugs 16:26