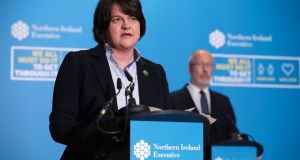 Northern Ireland is at a “tipping point” in the battle to stop the spread of coronavirus, the North’s First Minister has warned.

Two more people with coronavirus died in Northern Ireland over the weekend, the North’s Department of Health (DoH) reported on Monday. Both were aged 60-79 and died in hospital.

Speaking in the North’s Assembly, Arlene Foster said there were “those who think that we are scaremongering about this issue, and I just want to address that we are not”.

Ms Foster defended the fresh restrictions which have been introduced in parts of Northern Ireland, including Belfast and Ballymena, saying that concerns about the level of transmission in those areas was “very much still there”.

An additional 109 cases of Covid-19 were identified in the North on Monday. In total, 8,423 cases have been confirmed in Northern Ireland since the beginning of the outbreak.

The total number of fatalities recorded by the department now stands at 570.

Ms Foster also rejected the suggestion made by her party colleague, Sammy Wilson, that there was division within the Executive and those from other parties – including the Minister for Health – had pressed for greater restrictions.

The East Antrim MP told the BBC’s Good Morning Ulster that “if the technocrats in the Department of Health and if some of the Ministers in the Executive had had their way these restrictions would be far more severe and many businesses would be experiencing far, far greater difficulties as a result of them.”

He said: “Other Ministers wanted far, far more widespread restrictions and those were opposed by our party, and quite rightly so.”

The claim was rejected by Minister for Health Robin Swann, who told the BBC “there was nothing that we suggested was either not backed or challenged [at the meeting]”. He added: “I’m not going to breach the confidentiality of the Executive discussions to comment on ill-informed and bogus claims.”

The SDLP and Alliance Party also questioned Mr Wilson’s claims, and a spokesperson for the SDLP said his comments had “no basis in reality”.

Asked by the Ulster Unionist MLA, Robbie Butler, why Mr Wilson would have “formed the opinion that the First Minister was not on the same page as the health minister in regards to local restrictions in Ballymena and Belfast”, Ms Foster said she stood “full square with the decisions that we took in the Executive last Thursday.

Later in the debate she called for everybody to “wise up”, saying “we have some Ministers who love to resort to Twitter, who love to brief Good Morning Ulster, and then the rest of us are left having to deal with those issues.

“We’re dealing with huge issues in the Executive, and people should stop briefing against each other. We’re supposed to be in a five-party coalition dealing with all of these issues.” – Additional reporting: PA