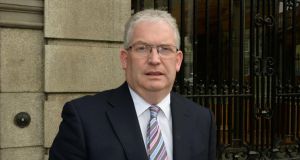 HSE director general Tony O’Brien said changing the culture of the HSE will take time and he hoped there would be less recourse to whistleblowers and a move towards “a normal complaint-making process”. Photograph: David Sleator/The Irish Times

The Health Service Executive appointed the prominent disability rights campaigner to act as a confidential recipient of abuse allegations in care homes in the wake of the Áras Attracta scandal.

Ms Gath, who describes herself as a disability activist and Thalidomide survivor, will act as a confidential recipient for whistleblowers, staff and residents, in relation to safeguarding issues and allegations of abuse, negligence or other mistreatment in HSE-funded services for vulnerable people.

Mr O’Brien said he had taken the step “of appointing someone who has been an excellent critic of the HSE and a fearless advocate across two continents; even being arrested for her trouble in the hope that it will give people the confidence to come forward and say to her things they may not say in present circumstance, to the manager of their facility, a national director, or myself”.

Mr O’Brien told an Oireachtas health committee that Ms Gath will take up the position on Monday and will have staff, premises and receive legal advice.

“She will be provided with office facilities and we will bring in staff to work with her who have had no prior engagement with the health service but who have relevant skills.

“She will, under the terms of the 2004 Act, be in receipt of a formal legal delegation from me, giving her authority throughout the health service under the powers vested in me as chief executive of the HSE,” he said.

Mr O’Brien said changing the culture of the HSE will take time and he hoped there would be less recourse to whistleblowers and a move towards “a normal complaint-making process”.

“We know from what has been reported back to us that there has been reticence on blowing the whistle, probably from past negative experience,” he said.

“We need that intelligence and I know how there are many people who want that channel and will use that channel,” he said.

Mr O’Brien said told the committee he visited Áras Attracta and met residents who featured in the programme.

“ They are non verbal, but they’re not non-communicative. They are in my opinion, extremely gentle souls. I wouldn’t say that we witnessed any difficult or challenging behaviour. We also met with other residents in the facility and staff that are providing care,” he said.

“If anything, it made it all the more difficult to see the way that those individuals had been treated because there was an absolute disrespect for their basic humanity and for their rights as citizens of this country,” he said.

The HSE hosted a “national summit for disabilities” on Tuesday at which senior personnel outlined the measures that have been taken to address the evidence of alleged abuse at Áras Attracta in Swinford, Co Mayo.

Taoiseach dramatically sacks Barry Cowen as minister over drink-driving controversy 08:42
Cowen ‘surprised and disappointed’ after being sacked on the phone by Micheál Martin 07:46
Covid-19: Overseas visitors are causing ‘stress and anxiety’ in some areas, TDs say 05:10
Three visitors investigated by Garda after refusing to fill in locator form 04:45
Irish peacekeeping veterans sue the State over ambush of convoy in Syria 03:01