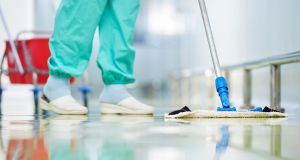 The support staff involved in the strike would include porters, cleaners, healthcare assistants and security personnel

More than 10,000 support staff in hospitals will go on strike from March 7th if, as expected, a vote for industrial action is carried on Monday.

The first Tuesday in March is also the day that more than 30,000 nurses across the country are scheduled to commence a work-to-rule, leaving open the prospect of widespread disruption across the country’s acute hospitals.

The support staff involved in the strike would include porters, cleaners, healthcare assistants and security personnel.

While hospitals would have to remain open for emergencies, industrial action by support staff and nurses would cause major problems for patients and staff in many hospitals.

The trade union Siptu is seeking access for up to 12,000 home helps and healthcare assistants to a job evaluation scheme it believes will result in many staff being paid more.

Under such job evaluations, if a person’s role, workload or responsibility is found to have expanded, they could qualify for an upgrade involving a pay rise. However, it is understood the Government is concerned the move could have significant financial implications.

Siptu members who work in hospital emergency departments are also seeking concessions similar to those obtained last year by the Irish Nurses and Midwives Organisation after it threatened industrial action. These included promotions, additional leave and a €1,500 education bursary.

Separately, support staff interns have claimed they are discriminated against as other staff who previously worked on an agency basis and who are converting to full-time positions in the health service are being offered incremental credit to acknowledge their previous experience.

The ballot of Siptu support staff has been under way for the past fortnight and the result will be announced on Monday.

Staff are expected to vote in favour of industrial action.

In a statement issued when the ballot commenced late last month, Siptu health division organiser Paul Bell said: “The failure of the HSE and Department of Health to resolve a number of issues has led to a situation where our members have been forced to contemplate strike action.”

Last week the Irish Nurses and Midwives Organisation announced it would stage a continuous work-to-rule from March 7th in a dispute over recruitment and retention of staff.

The union told its members last week that the action was designed in such a way that while nurses would continue providing the full range of services to patients/clients, in their own wards or areas, it would “require management to contract services so that activity levels match available staffing levels”.

If there is no resolution to the row, nurses are planning rolling strikes from mid-March.