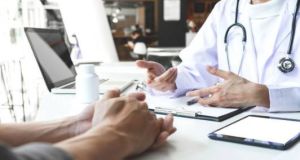 IMO president Dr Padraig McGarry warned that GP services were “at breaking point both in our day-time and out-of-hours service”. File photograph: Getty 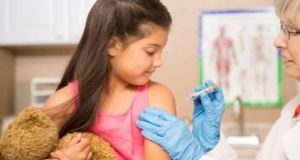 Minister for Health Simon Harris said on Sunday he had received Government approval to extend free GP care to all children under the age of 13, beginning with children aged 6 and 7 in 2020. File photograph: Getty

Doctors have said there are serious question marks over the viability of Government plans to extend free GP care to children aged up to 13 years.

The Irish Medical Organisation (IMO) said on Sunday that family doctors across the country were already facing intense pressure, and without the provision of significant additional resources it was “simply not realistic to introduce policies to increase demands on a what is a very fragile service”.

The IMO said the basis on which free GP care would be introduced for all children under the age of 13 had not been agreed between it and the Government.

Minister for Health Simon Harris said on Sunday he had received Government approval to extend free GP care to all children under the age of 13, beginning with children aged 6 and 7 in 2020.

The Minister said the Department of Health would draft a Bill to extend GP care without charges to all children of primary school age and to increase the income limits for medical card assessments for people aged 70 or more.

As part of a €200 million agreement reached last year with the Government to roll back cuts made following the economic crash and to invest in general practice, the IMO agreed to drop its opposition in principle to a further extension of family doctor care to other cohorts of children.

However, further talks will have to be held before the planned new scheme is introduced.

The Government’s plans to extend free GP care to additional cohorts of children have been announced on a number of occasions in recent months, including by Taoiseach Leo Varadkar last April.

It said the implementation of the budget measure giving access to medical cards for those aged 70 or more will see an increase in the weekly gross income threshold to €550 for individuals or €1,050 for couples. It is estimated that this measure will benefit up to 56,000 people.

Mr Harris said: “We remain determined to ensure that cost should not be a prohibiting factor in children accessing appropriate healthcare when and where they require it, and this decision is a significant step towards meeting that goal.”

IMO president Dr Padraig McGarry warned that GP services were “at breaking point both in our day-time and out-of-hours service”.

Dr McGarry maintained that the Government was not prioritising the real issues facing general medical practice at the moment, and was instead “pursuing an electioneering strategy of offering what they call ‘free’ services”.

“There are serious problems within general practice. The recent agreement between the IMO and the Department of Health is at the early stages of implementation and we must address what we can see are very significant problems in terms of the capacity within the service. We still have problems of practices being unable to take on new patients, serious problems in our out-of-hours service, and any extension of cards must take these issues into account. “

Separately, the first round of talks over the Government’s new pay proposals for hospital consultants will commence next Friday when Mr Harris meets with the IMO.

Talks with the Irish Hospital Consultants Association will take place the following week.

The Government announced before Christmas that from the second quarter of this year, all future consultants appointed to the public hospital system will work under a new Sláintecare contract which will require them to see only public patients.