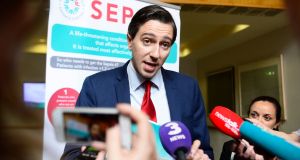 Simon Harris, Minister for Health, plans to commence the rest of the Children and Family Relationships Act later this year. Photograph: Cyril Byrne / The Irish TImes

Women using fertility treatment to get pregnant will be driven abroad or into “private arrangements with men on the internet” by plans to ban anonymous sperm donation and to create a register of donor-conceived children, fertility specialists have warned.

Other “unintended consequences” of the Government’s plans will be a rise in women buying sperm from foreign donor banks and using it in their homes without medical supervision, a substantial risk of sexually transmitted diseases from “random donors with questionable motivations” and job losses in the sector, they have told Minister for Health Simon Harris.

The Irish Fertility Society, which represents clinics, consultants and scientists working in the sector, is urging the Minister to postpone the changes, contained in as yet uncommenced parts of the Children and Family Relationships Act 2015.

The society says other unintended consequences will be increased multiple births due to a lack of monitoring of fertility medication, lower success rates as patients try “DIY” medical procedures on themselves and the creation of a “legal minefield” arising from private arrangements made between strangers.

“No other country has introduced such coercive legislation,” it says in a letter to Mr Harris, obtained under the Freedom of Information Act. “The proposed state mechanisms are unacceptable, are open to legal challenge and will be challenged by some of our members if parts two and three of the Act are implemented.”

The society says it is “deeply dismayed” that the legislation is to be commenced without any changes despite the submissions it has made. “This Act was rushed through without sufficient thought or consultation and has been presented to us as a fait accompli.”

Women patients will be caught in the “collateral damage” caused by the legislation and many will pass their fertile time before this can be fixed, it warns.

The introduction of the changes has been delayed since early 2016 to allow for a transition period and give the clinics time to prepare. Mr Harris says he plans to commence the rest of the Act later this year.

The society says constitutional rights upholding the family unit and the right to privacy will be threatened by an “intrusive” register and the provision of information to donor-conceived people about their origins.

“We are in no way encouraging secrecy about using donor sperm, or preventing the offspring from accessing information. The mechanism for disclosing information that has been proposed in this Act is totally anathema to the supporting, counselling-centred approach we already employ.”

The register will be “hopelessly incomplete” because it won’t capture arrangements made overseas, it points out.