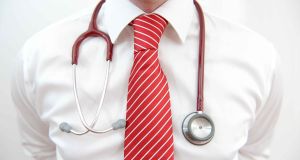 Emergency departments in all the State’s hospitals remained open on Tuesday despite up to 20 locum doctors failing to report for duty after their pay was cut.

Three hospitals in particular – Tallaght, Navan and Portlaoise – have been affected by the dispute, according to the Health Service Executive.

“All three are dealing with issues as they arise. To date, these have been resolved with minimal impact on patient wait times and minimal disruption to service delivery,” a HSE spokesman said.

There were 27 patients waiting in Tallaght’s emergency department for admission, 19 in Navan and 10 in Portlaoise, according to the daily trolley count by the Irish Nurses and Midwives Organisation.

The doctors in the dispute are employed through agencies, rather than directly by the HSE, and had indicated they may not turn up for duties this week. However, the scale of the stoppages appears to be smaller than was flagged by the doctors, who have told politicians up to 150 agency medical staff may decide to stop work.

The dispute was sparked by the decision of the HSE to cut agency hourly rates from €40 to €34 from September 1st, thereby saving €53 million over four years. It argued the change was needed to bring about greater pay equity with directly employed staff.

“This disparity has caused considerable difficulty in retaining doctors and nurses within our system,” the spokesman said. The new rate is 36 per cent higher than directly employed HSE doctors and on a par with UK rates, the HSE said.

The spokesman said well-established and agreed procedures were in place to deal with situations where staff do not turn up for duty. “The HSE would urge all staff to comply with these agreed procedures.”

One of those participating in the stoppage told The Irish Times the doctors involved had no alternative but to take action after their pay was cut. He said there was no transparency about the new arrangements and no information about what the locum agencies, who employ the doctors, were being paid.

Minister for Health Simon Harris appealed for patients not to be used as “pawns” in a pay dispute involving hospital staff.

The Irish Medical Organisation said the issue highlighted the manpower crisis in hospitals. “The HSE is unable to attract doctors to substantive posts due to the failure to honour contracts and recurrent public sector pay cuts,” said vice-president Dr Peadar Gilligan. “It is a ludicrous situation where the HSE response to the crisis is to cut the pay of locums.”

Fergal Hickey of the Irish Association for Emergency Medicine disagreed with the term “wildcat strike” used to describe the industrial action taken by doctors.

“If you can imagine you decided to buy a car for a fixed amount of money, and you go into the garage with 85 per cent of the value of what you’ve agreed, you don’t expect them to give you the car. And there’s an element of this about it,” he told RTÉ Radio.