Staff in some maternity units concerned about of lack of resources 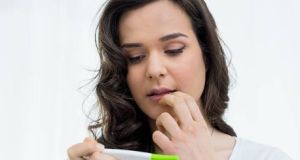 Highly placed sources said discussions between the Irish Medical Organisation and the Department of Health and HSE centred around the introduction of a fee structure covering up to three GP visits for women seeking terminations. File photograph: Getty Images

GPs are set to receive fees of between €400 and €450 for taking part in the Government’s new programme for the provision of abortion services.

Highly placed sources said discussions between the Irish Medical Organisation (IMO) and the Department of Health and HSE on Monday centred around the introduction of a fee structure covering up to three GP visits for women seeking terminations.

The Government plans to put in place a largely GP-delivered service from the beginning of next year.

Last night the IMO and a spokeswoman for the Department of Health issued almost identical statements which said that broad agreement had been reached between the parties at the talks, but that some details remained outstanding.

These issues would be considered further on Wednesday “when it is hoped that matters can be concluded”.

Meanwhile, staff in a number of the State’s 19 maternity units have voiced their opposition, mainly on grounds of lack of resources, to the planned introduction of abortion services from January 1st.

Demand for abortion in smaller hospitals will be very low, staff in some of the units have predicted.

At one recent consultation meeting in a small provincial hospital, it was claimed that as few as one woman a week may use the service, while most women seeking abortions would opt to use hospitals in the larger cities for reasons of privacy.

Among the hospitals where concerns have been raised about a lack of resources for the introduction of abortion services are Cavan, Kilkenny, Letterkenny and Wexford.

Obstetricians at Cavan General Hospital are understood to have written to the Department of Health expressing their concerns in relation to facilities and staffing.

Medical staff in St Luke’s Hospital, Kilkenny voiced serious concerns about resource issues at a meeting last week. The co-operation of hospital staff is crucial as it is planed that terminations will be fully integrated into the health service, rather than provided by private operators as in the UK.