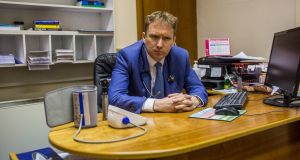 When the recent head of the health service says he would not want to be treated in your hospital, then you should know you have a problem.

Navan hospital’s 24-hour emergency department is “a wasteful use of public resource” that sees few patients and is costly to staff with expensive locums, according to former Health Service Executive boss Tony O’Brien.

“It’s not an emergency department I personally would have a wish to be taken to,” he said in a frank interview with the Sunday Business Post last weekend.

The context was O’Brien’s criticism of politicians’ failure to make “hard decisions” or let the HSE take them to create a better-functioning health service. Navan was not his only target – he also questioned the need for so many emergency departments in Dublin and an emergency department in Portlaoise hospital – but it was the most obvious.

The survival of Navan’s emergency department is either a miracle or a masterful political stroke, depending on how you look at it.

Back in 2013, a report recommended the downgrading of nine emergency departments in smaller facilities to injury units. All of these changes have come to pass – with the exception of Navan.

The Save Navan Hospital Campaign, which has organised several massive protest marches over the years, is happy to take the credit. “The fact that Navan is the only hospital retaining its emergency department is down to a very successful campaign,” says the group’s spokesman, Dr Ruairi Hanley. He goes on to refer to the other, downgraded hospitals as “glorified nursing homes”.

Navan’s five-year “temporary” arrangement is the subject of regular rumours about the ending of the 24/7 emergency department service, but so far nothing has changed. Surgical services were taken from Navan almost a decade ago and transferred to other hospitals in the region, but the emergency department has survived despite the concerns of senior clinicians within the HSE.

O’Brien has pointed out that Navan sees relatively few patients overnight. Most of the staff are locums, in part because working in such a small hospital without training opportunities is unattractive to doctors and in part because of the general difficulty recruiting staff for the health service.

The international evidence is that hospitals’ performance improves with throughput of patients – assuming they are adequately resourced. Quiet hospitals make for underused doctors whose skills become blunted.

One medic familiar with the hospital told The Irish Times he believed patients were at serious risk in Navan. Under current arrangements, patients requiring surgery are sent to other hospitals in the region – the Mater, Beaumont and Connolly in Dublin, Cavan and Drogheda – on a rota basis.

This means critically ill patients are being needlessly subjected to ambulance journeys, the doctor says. “In addition, if the patient has to come back due to complications, and the same hospital is not on call that night, they may end up in a third hospital. There’s no proper post-operative care.”

Hanley, a GP in Co Louth, is dismissive of clinical criticisms of the service in Navan. “I’m tired of listening to south Dublin medical ivory towers saying the service does not make sense. It’s easy to say that in Dublin when you have seven emergency departments on your doorstep.

“Yes, major centres do better trauma work, but they don’t do better in looking after old ladies with pneumonia, and that’s the kind of service Navan provides.”

Major centres do better trauma work, but they don’t do better in looking after old ladies with pneumonia

Closing the hospital’s emergency department will only result in more patients being sent to an already-overcrowded Our Lady of Lourdes Hospital in Drogheda, the group points out. An estimated 300 patients a year die as a result of trolley overcrowding, Hanley says.

The Ireland East group says it is working with management at Navan in co-operation with other hospitals in the group to plan the future as a model-2 hospital “in line with Government policy”.

Local TD Peadar Tóibín, who chairs the Save Navan Hospital Campaign, says Tony O’Brien’s remarks came as a shock locally. “It was bad for staff morale to have a former director general of the HSE speak like this and it wasn’t good for patient confidence either.”

“His job in the HSE was to ensure services were staffed properly so it’s not good enough for him to complain about hospitals struggling with a medical manpower issue he could have dealt with.”

Co Meath has one of the fastest-growing populations in the State, he points out. “We’re confident people will take to the streets again if there is any threat to their hospital.”

The provision of funding for 29 new beds in Drogheda in October’s budget has fuelled fears in Navan that the emergency department in the town is under renewed threat. Health bosses are also said to be bending the ear of local GPs, who are seen as having a critical role in influencing public opinion and the implementation of any changes.

Despite these concerns, and O’Brien’s comments, change would seem unlikely. With an election due, the three Ministers in Co Meath can ill-afford the hospital becoming a political hot potato.

“When they build a new regional hospital in Co Meath, I’ll be the first to call for the closure of Navan,” says Hanley, “But not until then.”