Taoiseach wishes he could direct health staff to work through January

An Taoiseach Leo Varadkar, responding to a question from Fianna Fáil leader Micheál Martin, has said that nurses and doctors should not take holidays over the Christmas period to help ease hospital overcrowding. Video: Oireachtas TV 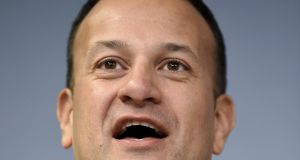 Taoiseach Leo Varadkar, speaking in Finland, said his comments should not be seen as controversial . Photograph: Reuters

Speaking to journalists in Helsinki on his way to the European People’s Party (EPP) conference, Mr Varadkar insisted that all he was talking about doing is what every business does, marshalling resources at peak times.

Asked if he would be issuing a directive to staff he said “I wish I had the authority to do that” - but that was a matter for the HSE.

“Every business has a period of peak demand,” he said citing the first weeks of September for those in education, budget time for those in politics and the summer months for those in tourism. “It makes sense if you are running your business well to always make sure that you match peak demand with peak resources,” he said.

“So we know that peak demand in the health service happens in the first two weeks in January. Therefore it makes sense that the minimum number of staff should be on leave during that period. No bed should be closed because people are on leave. The emergency department and medical consultants should be there. The surgeons can take their holidays during that period because most of the operations get cancelled anyway, so it’s a question of matching peak demand with peak resources,” he said.

That’s the norm across industry and services, he said, and should be the case in the health service. “It shouldn’t be a controversial comment,” he said.

He said at present hospitals work on a skeleton staff over the 12 days of Christmas, radiology departments and laboratories don’t work “at full throttle”, patients come in, they don’t get their tests, diagnosis and treatment and “the numbers add up and up and up and guess what happens in the first week in January. So what I’m saying is that needs to change this year”. Of course staff would be paid for that and get their annual leave entitlement, he insisted.

He said more money, more staff and more beds on their own do not work which is why he was advising the HSE to change things this year.

Mr Varadkar was following up comments he made in the Dáil on Tuesday night when he said nurses and hospital consultants should not take holidays in early January, as plans to deal with overcrowding in hospitals this winter were being discussed.

He said radiology departments and laboratories should also be open and operating “at full whack” over Christmas and new year. “We need to make sure that every bed will be open. That is the kind of winter plan we need, not the kind we have had for years and years that does not work,” he said.

The comments from the former health minister and doctor have been criticised by health service staff who say lack of beds are among the issues causing patients to languish on trolleys in emergency departments.

There were 591 admitted patients waiting for beds in hospitals across the State on Wednesday morning, the Irish Nurses and Midwives Organisation (INMO) said.

The Irish Hospital Consultants Association’s president Dr Donal O’Hanlon said he was extremely disappointed with the Taoiseach’s comments “ which have attempted to trivialise the very serious issue of the hospital bed shortage”.

He said the most significant issue in the health service is the lack of capacity in public hospitals. “The trolley crisis is not just over the Christmas period. The lack of capital investment in our public hospitals has resulted in a year-round crisis for hospitals which are struggling without the means to provide a proper standard of care to their patients,” he said.

Dr O’Hanlon said the required expansion in acute hospital bed capacity was acknowledged a review of bed capacity and the National Development Plan which provides funding for an additional 2,600 hospital beds. “However, the additional beds have not materialised. There is a complete lack of urgency in putting in place additional hospital beds even though there is a record number of patients being treated on trolleys year-round and around 20 per cent of the population on waiting lists for acute hospital and other care,” he added.

He also pointed to the fact that over 500 permanent hospital consultant posts are unfilled. “The ongoing trolley crisis will not be solved by cancelling leave at Christmas time,” he said.

Dr Peadar Gilligan, president of the Irish Medical Organisation (IMO) and himself an emergency medical consultant, said a lack of beds and resources rather than doctors and nurses on leave is causing overcrowding in hospitals at Christmas.

Blaming doctors and nurses for the failures of the health system was not helpful or appropriate he said.

He told RTÉ’s Morning Ireland the Taoiseach’s comments in the Dáil were more of a reaction to his frustration at the relative lack of progress on the issue of overcrowding in hospitals and the increase in waiting lists.

“The reality is that doctors and nurses and their leave is not a contributor to the huge overcrowding that we have of hospitals in Ireland manifesting in the emergency departments,” Dr Gilligan said.

“The reality is the lack of capacity and whilst the Taoiseach referenced the fact that there are 247 additional beds in the system, that is a start, but the immediate requirement is more like 1,260 moving towards 2,600 in the near future, so it would be more helpful if we were seeing a strategic plan with regard to the delivery of that additional capacity and also with regard to the recruitment debacle in the country at the moment”.

Oncologist Prof John Crown said the health service is not under funded, it is “malfunded” and that the Taoiseach’s call for nurses and doctors to work over the Christmas holiday period is “nonsensical”.

The business plan of the HSE is about bed closures and “let them wait” he told Newstalk’s Pat Kenny show. If more doctors and nurses were appointed staff would “row in” with plans for full service over holiday periods, he said.

Prof Crown called on politicians to reduce their three week Christmas holiday break and instead pass legislation to remove the mandatory requirement to retire at age 65. This would make a huge difference and ease the pressure to find replacements for doctors and consultants forced to retire. Many want to continue to work, he said.

“We don’t have enough people in posts, there is a shortage of physiotherapists, social workers doing the work of up to seven people in another jurisdiction. The system is creaking,” he added.

Prof Crown said the HSE is “top heavy with bureaucrats. There are too many of them. It over complicates things. There is a grotesque shortage of doctors, we are vastly below international averages.”

Phil Ní Sheaghdha, the INMO general secretary, said that real issue is that there is not a winter plan in place and that rosters are completely depleted with a growing reliance on agencies and overtime.

She pointed out that there are 227 fewer nurses working in the Irish health care system now than there were in December last year.

Last month the IMO predicted Ireland’s hospitals face another chaotic winter with the number of patients on trolleys set to exceed 1,000 in a single day.

And earlier this week details of a HSE review of how hospitals coped last winter found a sustained surge in the numbers attending hospitals, insufficient bed capacity, staff recruitment and retention problems as well as a prolonged flu season and extreme weather all contributed to unprecedented overcrowding.

The HSE analysis, completed in recent days, said special funding to address the pressures effectively came too late in the year to be of optimal use.

While the review by the HSE said special funding for dealing with winter pressures in the health service should be agreed in the summer, the executive’s final plan for this winter will only be submitted to the Department of Health in the coming days.