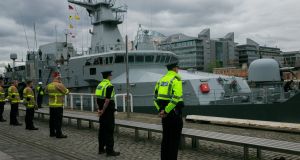 Members of the Emergency Services lined Sir John Rogerson’s Quay on Friday to pay tribute to the Naval Service as it completed its Covid-19 support mission.

The LÉ William Butler Yeats departed from Dublin at midday on Friday to return to routine security operations at sea.

The Naval Service, with the support of the Naval Service Reserve, has helped operate three testing sites in Dublin, Cork and Galway since March the 15th. During that time it assisted in conducting 6,000 tests using six ships.

The testing site at Sir John Rogerson’s Quay, one of the most visible in the country, will now cease operations as the Naval Service hands over operations to the Army. Army personnel will continue testing at the Aviva Stadium in south Dublin at a site which began operations on Thursday. It will be capable of conducting 400 tests a day.

The LÉ Eithne will remain in Cork City where it will be used for storage and logistics support. It will no longer be used for testing.

Gardaí, fire fighters and HSE staff stood at attention on Sir John Rogerson’s Quay on Friday as a bagpipe played to see off the Yeats.

A Defence Forces taskforce at McKee Barracks in Dublin will continue to provide support to the HSE under Operation Fortitude as officials endeavour to ramp up testing to 100,000 a week.

1 More than 30 people queue overnight to secure property in Carlow
2 Coronavirus: Further 430 cases reported in State is most in a day since April
3 Trump paid no federal income taxes in 10 of past 15 years – report
4 Remains of Moldovan who died in N7 crash to be repatriated
5 Hello Eir, is anybody there? Four unhappy customers complain
Real news has value SUBSCRIBE