Coronavirus: Hospital’s late reporting of over 200 cases under investigation 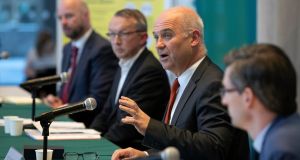 The National Public Health Emergency Team (Nphet) is investigating whether all hospitals have fully reported cases of Covid-19 after it emerged that one has reported hundreds of cases late.

Chief medical officer Dr Tony Holohan said his group had only just learned of the reporting omission and was trying to establish the full facts.

He declined to say whether there would be consequences for the hospital - the prompt reporting of Covid-19 is a legal requirement - and admitted he did not know whether the contacts of the cases involved had been traced.

The late-reported cases account for more than half of the 426 new cases of the disease reported by Nphet on Thursday. Discounting these cases, the underlying trend shows a continuing decline in new case numbers.

The deaths of another 10 patients were announced by Nphet at its briefing on Thursday. There have now been 1,506 Covid-19 related deaths in the Republic. The total number of cases is now 23,827.

Many of the cases reported late by the hospital date back to mid-March but have only just been notified to the Health Protection Surveillance Centre, Dr Holohan said.

“They were accumulated, we weren’t aware of them, and they were reported in one group today to add to the number we would have diagnosed over the course of the day.”

Nphet at its meeting on Thursday made recommendations on the planned easing of restrictions on Monday, including proposals on the wearing of face-coverings in certain situations, which will be considered by Cabinet on Friday.

The reproduction number, a measure of the number of people each case goes on to infect, was stable at 0.4 to 0.6, the briefing was told.

Prof Philip Nolan, chair of the Nphet epidemiological modelling group, said all indicators of the spread of Covid-19 were decreasing, including the average number new cases daily, the number in hospital and in ICU and the number of deaths each day.

The average number of new cases was 600 a day in mid-April, under 300 last week and an average of 172 over the last five days, Prof Nolan said.

The model developed to predict the pattern of the epidemic had forecast cases to drop to 150 a day at the end of May, but this level has been reached around now so “we’re doing somewhat better” than expected, he said.

The number of healthcare workers who had died now stands at seven, an increase of two over last week.

Asked about tensions over testing targets that were revealed in a letter from HSE chief executive Paul Reid to Nphet last month, Dr Holohan said everyone was working “at pace” and “under pressure” and tensions would arise “from time to time”.

HSE chief clinical officer Dr Colm Henry said it would be “implausible” to say there were no tensions “but we work together and sort things out”.

Both the HSE and Nphet were “completely united” in their strategy, he added.

An analysis of cases up to Tuesday shows 57 were female and 43 per cent were male. The median age was 48 years and 13 per cent were hospitalised. A total of 7,123 cases were associated with healthcare workers. Community transmission accounts for 60 per cent of cases.

Of those who have died with the disease, 86.7 per cent had underlying conditions. Some 756 deaths were male and 750 were female. The median age of deaths was 84 years and the mean was 82.

So far, 388 patients have been admitted to intensive care, of which 58 remain there.

Some 7.5 per cent of cases in residential care facilities, and 5.3 per cent in nursing homes, were hospitalised, he said.

From March 19th, close contacts will be tested automatically for the virus, Dr Henry also said.