Do we need updates on the health of our politicians? 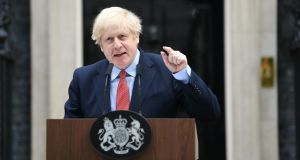 Britsh prime minister Boris Johnson: to what extent should public and media interest in a high-profile individual’s health be tempered with the right to privacy? Photograph: Stefan Rousseau/PA Wire

In the days before British prime minister Boris Johnson was rushed to hospital on April 4th with Covid-19 infection, Number 10 was adamant that his health was not in decline.

Writing in the Guardian on April 6th, Dan Sabbagh and Rowena Mason catalogued the upbeat reassurances that accompanied his worsening condition, noting that some Conservative MPs were “worried that Downing Street’s evasiveness on the seriousness of the prime minister’s condition will undermine trust in what they say going forward”.

This implies that unless the public’s thirst for disclosure of a politician’s medical condition is satisfied then its trust is withheld. However, “the public” is comprised of individuals, many of whom would refuse to share their medical details with anyone, let alone a nation. In which case, to what extent should public and media interest in a high-profile individual’s state of health be tempered with an acknowledgement of an individual’s right to privacy?

Prof Gautam Gulati is adjunct associate clinical professor at the graduate entry medical school at the University of Limerick. He told The Irish Times: “Public and media interest in the health and wellbeing of high-profile figures is not surprising. However, every individual has the right that their medical information is treated with the utmost of confidentiality and that such may be shared only with their explicit consent.”

Prof Gulati makes clear that there are only a few exceptions to this rule, which are set out by regulatory bodies in their ethical guidance: “The public profile of the patient,” Prof Gulati explains, “is not one of these exceptions. A patient’s right to confidentiality must always be respected regardless of who they are. Public figures, like anyone else, will suffer physical and mental health illnesses in their lifetimes. Like anyone else needing medical care, they and their loved ones will feel vulnerable at this time. At such times, all efforts must be made to respect their privacy.”

But the interface between public interest and an individual’s privacy is a difficult one to patrol. For example, a commentary in the Mayo Clinic Proceedings describes how, when United States congresswoman Gabrielle Giffords was injured during a mass shooting in Arizona on January 8th, 2011, “regular updates on the nature of her injuries . . . were provided to an absorbed press” with her husband’s approval. Yet, despite this, “some privacy experts remained surprised at the amount and type of health care data the press was privy to. Included were concerns of whether Ms Giffords herself would have approved of having so many medical and personal details being shared with a wide audience.”

Article 12 of the 1948 Universal Declaration of Human Rights stipulates that “No one shall be subjected to arbitrary interference with his privacy, family, home or correspondence . . . ”, but over 2,000 years earlier the Hippocratic Oath reminded medics that “Whatever . . . I see or hear, in the life of men, which ought not to be spoken of abroad, I will not divulge, as reckoning that all such should be kept secret.”

This did not trouble Dr Charles McMoran Wilson (1882-1977), who was Winston Churchill’s personal physician and a profligate spiller of medical beans. In 1964, a year before Churchill’s death, when Lady Churchill discovered that Moran was planning a book about his relationship with the former prime minister, she wrote to remind him that “I had always supposed that the relationship between a doctor and his patient was one of complete confidence . . . ” Moran didn’t bother to reply. This episode is documented by Dr AW Beasley, writing in the Journal of the Royal College of Physicians of Edinburgh.

In Beasley’s article, Churchill, Moran and the Struggle for Survival, we learn how Moran published what he loosely described as his diary, a document which Martin Gilbert, Churchill’s official biographer, failed to find. There wasn’t one. The Lancet, relates Beasley, described Moran’s disdain for patient confidentiality as “creating a bad precedent which none should follow.” Beasley also notes that among Moran’s indiscretions he generated the myth of Churchill’s “black dog” depressions, which Churchill’s friend John Colville persuasively attributes to Moran being “ignorant of the jargon of an age preceding their own.”

Another medic who couldn’t wait to share his patient’s medical history with the world was Dr Claude Gubler, personal physician to France’s president Mitterrand from 1981 to 1994. In 1996, Gubler was put on trial for breach of professional secrecy, following the publication of his book Le Grand Secret in which he described the progress of the president’s metastatic prostate cancer.

A Paris judge considered the book to be “a particularly grave intrusion into the intimacy of family private life.”

Writing in 2003, David Owen, the former British foreign secretary, shared his belief that “. . . there should be provisions in place in a democracy to ensure that before voting any candidate for Head of State or Government into office, whether for the first or for subsequent elections, the general electorate should know the results of an up-to-date independent medical examination.”

Accepting this argument, might Franklin Roosevelt’s poliomyelitis have disqualified him from standing for the fourth time as United States president in November 1944? Would the British electorate have dispensed with Churchill had they known he was hounded by “black dogs”, wrongly ascribed to depression?

During this ongoing coronavirus pandemic there is already a surfeit of armchair epidemiologists; their ranks need not be swelled by amateur medics who demand constant updates on the health of politicians.

Covid-19 Q&A: How are we doing now and is there any good news?