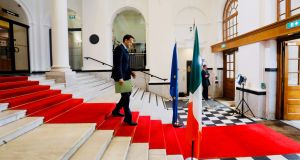 Taoiseach Leo Varadkar: senior figures are worried about how feasible it would be to reimpose restrictions if there was a second wave of infections. Photograph: Leon Farrel

The continuation of the lockdown measures, when it was announced by the Taoiseach at Government Buildings on Friday evening, was not a great surprise; the move had been widely expected in recent days.

Equally, the gameplan for the reopening of Ireland’s economy and society was anticipated, though the details will no doubt be pored over by people wondering what the summer holds for work, holidays, schools and recreation.

The answer for them: they can look forward to a slow, cautious and step-by-step return, not to normality but to a strange in-between world, somewhere between the lockdown and pre-Covid freedom.

Several Ministers have made clear in Cabinet discussions their view that a quicker reopening is desirable, from both an economic and social perspective

The five stages of opening up Ireland’s social and economic life begin on May 18th and – all going well – will continue at three-week intervals until the last one commences on August 10th. Schools and colleges return in the autumn.

It will be a patchy, scratchy and nervous summer, as people’s plans – to reopen their business and save it, to go on holidays, to see their families, to live their lives as they would wish – all depend on the numbers reported by the health authorities about the spread, containment and lethality of the virus.

The Government’s approach remains marked by extreme caution, and deference to the advice of the public health officials. The fact is that Ireland is unwinding its coronavirus lockdown more slowly than most EU countries. It is not clear why – because the Government is being more cautious and conservative, or because the situation here is worse.

But something has shifted in that matrix of decision-making this week with the assertion by the Cabinet – in theory the body that actually governs the country, after all – of a greater role in deciding when and at what pace the reopening takes place.

By the nature of these things, that will make it more transparent, too. As Ireland moves into the next phase of its response to the pandemic, public health considerations – while still paramount – will be joined by economic ones and also by the judgment of the public mood by elected leaders and representatives.

Several Ministers have made clear in Cabinet discussions their view that a quicker reopening is desirable, from both an economic and social perspective. For now, however, the judgment of Tony Holohan, the chief medical officer, is holy writ.

In addition, Government sources say senior figures are worried about how feasible it would be to reimpose restrictions if there was a second wave of infections; many Ministers say the patience of significant chunks of the public has already worn pretty thin. The example of Singapore, where restrictions were lifted then reintroduced, has been much cited in Government circles in recent days.

Politically, Fine Gael Ministers are acutely conscious that the Government’s handling of the crisis so far has won them kudos from a public which voted in large numbers to sack them in February. And with a second election a distinct possibility, they don’t want to do anything to endanger that regained reputation.

That nervousness expresses itself in several ways. One of them is an acute sensitivity about the tardiness in increasing testing capacity. Another is the much-criticised lack of transparency about the decision-making, which even by the standards of this administration, is highly centralised.

Despite entreaties, Varadkar declined to take questions at his announcement, though in fairness Minister for Health Simon Harris later conducted a briefing with the chief medical officer at which journalists were permitted to ask questions. The Taoiseach was to appear on the Late Late Show, of course.

Two unknowns will impact on the implementation of the roadmap published on Friday night. The first is the behaviour of the virus: will it continue to recede or will there be a “second wave” as officials and Ministers fear? If so, the summer could take a very different turn.

The second is the impending change in government, uncertain now in its exact form but inevitable in the coming weeks. The position of the Minister for Health seems unlikely to change; but a new taoiseach and a new cohort of ministers may have a different emphasis than the current one. One way or another, many of the steps laid out by Varadkar will be implemented by a different administration.