Renua leader Lucinda Creighton arriving at the Election 2016 Count Centre said that 'it probably would have been easier to get elected in Dublin Bay South as an Independent, but I've never been one to take the soft option’.Video: Bryan O'Brien 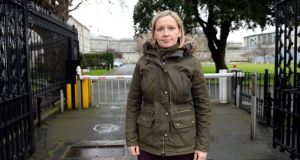 Renua leader Lucinda Creighton, who lost her seat in the general election in February, has resigned from the party leadership saying it was time to “allow new voices to be heard”.

Addressing party members at a meeting in Portlaoise on Saturday morning, she acknowledged “key mistakes” that had been made but she also said Renua had got “quite a bit” right.

“Flat tax, while innovative and not without merit, never captured the public imagination. It was wrongly depicted as a policy for the rich and a punishment for the poor,” she said.

“Nothing could have been further from the truth, but I as leader have to take responsibility for our failure in persuading the Irish people of its merits.”

Ms Creighton said everyone in Renua Ireland had shared “the goal of making work pay but we should, and could have presented our tax policy in a way that was not seen to divide society but instead reward it”.

“That is what we intended but we failed to do it, and Renua Ireland must learn from this mistake in the future.”

The former TD and minister of state for European affairs said she had relished every moment of elected office, as a councillor, TD and minister. She forfeited both her ministerial office and parliamentary party membership when she defied Fine Gael on abortion legislation in July 2013.

“They were the proudest years of my life. I did not imagine I would be departing the political stage as early as this, but democracy is a humbling experience.”

“This has been a remarkable journey that did not end the way any of us would have liked or envisaged, but is one I am extremely grateful for those who made it possible, and the supporters and members across the country who shared in our common ideals.”

She said that despite its best efforts, the party had failed to “shine a light” on the different faces of those running for election. The party failed to get a TD elected from its 24 candidates and won just over 2 per cent of first-preference votes in the general election .

“This is the rough and tumble of trying to start a new political party, but we could, and should have done better so a larger story of Renua could have been told.”

On what she believed the party had got right, Ms Creighton said: “The principle of freedom of conscience in Irish politics is now party policy in Fianna Fáil and Fine Gael. The whip in Irish politics has been permanently loosened.”

She added that ending tax discrimination against the self-employed was “a matter of national political consensus” and formed a key part of the programme for government.

The principle of depoliticising the health system was also government policy.

“It’s time for me to move on from leading Renua Ireland and allow new voices to be heard,” she said.

“I leave my role as party leader perhaps more humbled, but no less proud of all that we have achieved together and what can be accomplished in the future.”

After its electoral defeat, Ms Creighton said the party would continue and would run candidates in the next local elections in 2019.

Ms Creighton’s role as leader had been uncertain because the party’s Constitution states that the head of a party must be an elected politician. Offaly County Councillor John Leahy last month said that he wants to become leader of Renua Ireland.