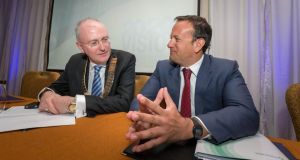 The proposed deal to provide free family doctor care to all children under six has divided doctors, with the plan being rejected by the National Association of General Practitioners (NAGP) at an emergency meeting yesterday.

However, it has already been backed by the Irish Medical Organisation, which claims to represent a majority of GPs.

All 23 council members of the NAGP voted against the deal and the association described the initiative as “medical apartheid”. NAGP chairman Dr Andy Jordan said provision of free care must be prioritised for those in genuine medical and financial need.

“It is motivated by election votes rather than real patient need. The mortality rate in children less than 18 years of age is 3.8/10,000 and the vast majority of those are caused by accidents, not illness.

“At the same time we have 5,000 deaths per year in Ireland from cardiovascular disease but there is no money to provide free GP care to those patients,” he said.

The union, which represents about 1,200 GPs, has called onall GPs to stand together against the contract.

However, IMO president Dr Ray Walley said there was no trust among many doctors in the Department of Health and the HSE providing additional resources to general practice.

He was speaking at a national meeting of GPs held at the IMO’s annual conference in Kilkenny. It was convened to discuss the agreement reached between union negotiators and the Government last Thursday which provided for the provision of free family doctor care for all children under six.

In a statement after the meeting, the IMO said many speakers had expressed support for the deal. However, others voiced a lack of trust in the HSE and spoke of their concerns about the deal’s implications for workload and the damage caused to general practice by years of under funding.

Minister for Health Leo Varadkar told the meeting that cuts imposed on general practice under financial emergency legislation over recent years would be reversed.

“They are not going to be reversed and just go back to the way things were beforehand. What we plan to do for all groups is to negotiate the unwinding of FEMPI [financial emergency legislation] over a number of years. We will be looking for things in return for that,” he said. “The kind of things that we are asking in return is the under-six [care deal], the new [care] arrangements for [children] with asthma and [people] with diabetes.”