Doctors claim they have been forced to cancel private hospital procedures 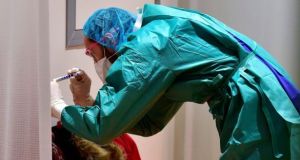 One consultant said he had been told that a planned urgent procedure on a patient with cancer had been cancelled. File image: Getty

Some private sector medical consultants have claimed they have been forced to stop carrying out procedures because the Government has withdrawn insurance cover from them.

Medical consultants working in private hospitals taken over by the Government, and who had not signed up to a temporary contract to treat only public patients, were covered by the State’s Clinical Indemnity Scheme. However, that arrangement expired at midnight last Sunday and they are no longer covered by the scheme.

Such consultants were not permitted to charge fees to patients but some had been carrying out procedures on a voluntary pro-bono basis in private facilities which have been taken over by the State to provided additional capacity during the current Covid-19 crisis.

The Irish Times on Wednesday spoke to one private consultant who said he had been told that a planned urgent procedure on a patient with cancer had been cancelled in a private hospital due to the absence of clinical indemnity cover. The patient is now expected to be dealt with in the public system by another doctor.

While the Government effectively took over nearly 20 private hospitals for an initial three-month period, this move did not cover up to 600 medical consultants who practised in these facilities.

Government sources on Wednesday said that 281 of these private consultants had now signed up to work in the public system with a further 64 indicating a willingness to sign.

Have you a health issue you have not received treatment for since Covid?

Government sources said in the Bon Secours Group, 109 consultants had accepted the temporary locum contract and more were expected to do so.

Sources said there was a 73 per cent occupancy rate in the Bon Secours hospital in Cork.

However in other locations doctors have maintained that the figure is much lower with only about 25 per cent of beds in use.

The HSE said on Wednesday that in the last week that had been “a significant increase in utilisation across most sites”.

“Up to end April, based on the information received to date, private hospitals activity includes the following - 2,650 inpatient cases, 8,585 day cases, almost 8,000 diagnostic tests and 3,180 outpatient appointments under these new arrangements. It is expected that the final total activity figures will be higher once the activity is validated by the private hospitals. Services include chemotherapy, radiology, time dependent procedures such as endoscopy, cardiovascular surgery and cancer surgery”, the HSE said.

Many private consultants have not signed the proposed contract - which offers a salary of between €141,000 and €195,000 - on the basis that they would still have to pay the cost of their private rooms, staff and other facilities and that in the absence of income from fee-paying patients, their practices could become not viable.

Government sources said private consultants who signed the proposed new public contract would be covered by the clinical indemnity scheme operated by the State Claims Agency.

Sources said the issue of cover for doctors’ carrying out pro-bono work was being looked at.

Government sources said the HSE “may also contribute to the cost of these consultants’ private rooms so long as it is agreed as necessary for the services being provided”.

The HSE declined to answer questions about any agreement it had entered into regarding payment for consultants’ private rooms.

The Minister for Health Simon Harris is expected to hold talks with the private consultants later this week.