Covid-19: Mandatory quarantine for new arrivals would not be effective, Minister says 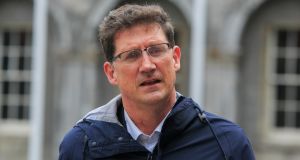 The rollout of a mandatory quarantine regime for people arriving here from outside the State would not be effective due to difficulty securing agreement from Stormont and the British government on an all-Ireland approach, Minister for Transport Eamon Ryan has said.

Several leading health experts have called for the State to introduce a mandatory two-week quarantine period for people entering the country as a means to prevent imported coronavirus cases.

Mr Ryan, the Green Party leader, said the lack of a parallel regime in Northern Ireland would make introducing such a measure difficult.

“We would have to have agreement with both the British government and Stormont and we’re not getting that,” he told RTÉ’s This Week programme on Sunday.

“If you want to go down the route of quarantine, that would make it not effective, because you would have that open door to the north, so you couldn’t actually lock down in that way.”

There were no further deaths from Covid-19 reported on Sunday, the first day without a fatality linked to the disease being reported in five days. An additional 10 cases of the virus were reported by the National Public Health Emergency Team (NPHET) on Sunday, the lowest such daily total in more than a week. Two deaths and 21 new cases were reported by NPHET on Saturday.

Other island countries such as New Zealand have introduced mandatory quarantining for people entering the country, with repeated testing being used to clear arrivals before they are permitted to enter the community.

The Government has repeatedly said the Republic had to allow flights into the country for essential travel.

Currently those arriving in the State are required to fill in a passenger locator form to tell authorities where they will be self-isolating for a required 14 days.

Mr Ryan said the Government was “not happy” that this system was “rigorous or effective at the moment”. It is expected measures to better enforce the 14-day self-isolation period will be announced following a Cabinet meeting this week.

Public health expert Dr Gabriel Scally said the country had reached a “fork in the road” in its response to Covid-19, and called for increased restrictions on people arriving into the country.

While accepting there was pressure from the airline and tourism industry when it came to travel, he said he would “prefer to take the safe road and keep it [Covid-19] out”.

The US and the UK are not expected to feature on the Government’s forthcoming “green list” of countries for safe travel, while climbing coronavirus infection rates in Spain, Portugal and France are likely to rule out their inclusion as well.

Labour Party transport spokesman Duncan Smith said the green list “will create as many problems as it resolves”.

Mr Smith said that holidaymakers with flights booked to those countries would not be able to claim refunds despite the current advice against non-essential overseas travel, and if people were still being advised against non-essential travel there was “a clear need for refunds, vouchers, or the ability to rebook at a later date for holidays”.

“Planes will still be travelling but people won’t be able to get refunds,” he said.