I was confused by the new hospitality regulations, then upset and then angry 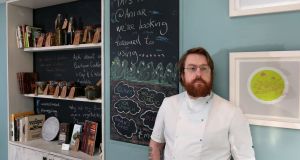 J P McMahon: I wonder who is actually writing these regulations as they seem to show no understanding of the daily workings of the hospitality industry. Photograph: Joe O’Shaughnessy

Furthermore, why couldn’t people eating at the same table share food as they were all deemed to be close contacts.

Ironically, this rule was only rescinded on Thursday, amid another new wave of regulations from Fáilte Ireland. I wonder who is actually writing these regulations as they seem to demonstrate no understanding of the daily workings of the hospitality industry.

They seem to be written by an uncaring father who feels no need to communicate with his children – just punish them.

Among the new regulations was the request to record what customers eat and drink. Initially, after a cursory glance, I thought it just meant that we needed to keep records of receipts, which is something we do anyway. I assumed it was to stop certain pubs serving 10 pints and a few portions of chips.

However, I was wrong. The regulation actually stipulates that we have to keep a record of what each customer ate, as in, pair the bookings with the bill and keep these for 28 days.

I was confused, then upset and then angry. Had I missed something?

Don’t get me wrong. I’m not an anti-mask vigilante. I believe strongly in contract tracing, mask-wearing, washing hands and, of course, social distancing.

But this was absurd. How would me keeping a record of what people eat prevent the spread of the virus? It wouldn’t, plain and simple.

It is another altogether Irish way of dealing with a particular problem: make up a rule that pretends to deal with the problem while not actually acknowledging the real issue.

If the rule is established to stop people ordering a plenitude of pints and very little food – as Minister for Health Stephen Donnelly subsequently clarified – then call it as it is. Otherwise it shows a complete lack of respect, and it betrays a fundamental lack of respect to an industry already on its knees.

The other issue I have with this regulation is the way it was communicated. I found out about it on Twitter.

Again and again during this pandemic new rules and regulations are brought in with no consultation with the industry. Would it kill the Government to call the Restaurants Association of Ireland or anyone in the industry to discuss the new regulations? Otherwise, where is the respect, the buy-in?

The position of the Government seems to revolve around “rogue traders”, pubs serving alcohol with no food. Then deal directly with this issue. Don’t skirt around it. Everyone knows which pubs are breaking the rules. It’s common knowledge on every street.

This new regulation will stop nothing. Furthermore, how many drinks can one have when one spends €9? Has this ever been asked?

So if Garda Joe finds out that Paddy had 10 pints with his €9 meal, what can he do? Probably nothing.

I don’t mean to be facetious, but if the Government continues to treat us like children then they should expect childish responses.

It is time we grow up as a nation. Ireland is the only country in Europe that has not opened its pubs. Many pubs are paying full rent while closed. No stay-and- spend voucher is going to help them. Of our three restaurants the one that is closed is the one we are paying full rent on. It seems it is “our” problem. Not the landlord’s.

What happened to that fatuous slogan “we’re in this together?” We are not in this together. The hospitality industry is on its knees. We need direct and substantial action if many of us are to survive. I tire of this Government’s inability to communicate. It almost seems it wants to self-destruct.

I emailed Ministers and members of the Government, and I received replies saying that even they did not agree with it.

Why punish innocent people for crimes they may commit, or that others have already committed?

We are heading towards the realms of an over-bureaucratic state were inane regulations impede survival.

We have records of everything we sell. That should be enough. I shall be doing nothing else.

Winter is coming. It will be unlike anything our industry has ever seen. We need a Government that shows unity, that aligns itself with Europe and tries to tackle this virus intelligently. It remains to be seen if this will happen.

It's crystal clear, making this soup is a job for the dedicated, or the deluded
8