Drug approved by US authorities but not yet by EU a ‘major breakthrough’, says specialist 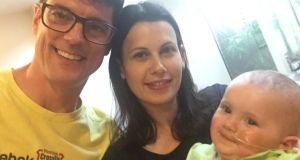 Stephen, Brigetta and Nellie Lannen, who who has spinal muscular atrophy type one, a rare genetic condition. 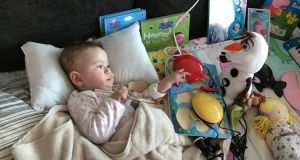 Nellie Lannen was diagnosed with SMA1 when she was seven months old.

The parents of a young child with a rare genetic condition are seeking access to a new drug they believe could save their daughter’s life.

Stephen and Brigetta Lannen urgently want nusinersen – developed by Biogen, sold under the trade name Spinraza and approved by the US Food and Drug Administration in December – for their daughter Nellie, who is 22 months old and who has spinal muscular atrophy type one (SMA1).

The treatment is the first for the condition, which causes impaired breathing and the wasting of muscle tissue.

The Lannens, who live in Dublin, said they were told children with SMA1 typically die at the age of two. They said Nellie, their only child, is one of only two children in Ireland with the condition. The Lannens fear access to the drug may be delayed due to its high cost.

Mr Lannen said timing was critical, as even a common cold could threaten Nellie’s life.“We don’t have any time. She could get an infection tomorrow and be back in Temple Street hospital,” he said.

“If she goes into Temple Street with an infection, we’re 50-50 at best at this stage if she will come out. It’s life or death for Nellie and the other little girl: they don’t have any other hope but this drug.”

A spokeswoman for the National Centre for Pharmacoeconomics (NCPE) said the company had not been in contact in relation to the drug. “The drug is currently not being considered by the NCPE as it has not yet received a positive opinion or marketing authorisation from the European Medicines Agency [EMA],” she said.

The Health Service Executive (HSE) said it was aware Biogen had applied in the autumn to the EMA for market authorisation in the European Union. “EMA assessment processes generally take around one year. It is unlikely that the HSE will receive a pricing and reimbursement application until later this year,” she said.

Mr Lannen said Nellie was diagnosed with SMA1 when she was seven months old. “She was perfectly normal for six months. She was kicking her legs up in the air and all that sort of stuff.

“She was brought for a six-month check-up and the doctor said she was not lifting her head at all, and she had been lifting her head, at about three months, a little bit.”

After tests, Nellie’s condition was confirmed at Temple Street Children’s University Hospital. “They said life expectancy was two years and they would try manage the symptoms best they can. There was no cure.” He said Nellie needs to use a machine for up to 20 hours a day to help her breathe and is fed through a nasogastric tube as she cannot swallow.

He said he and his wife are supported in giving Nellie 24-hour care by the HSE, the Jack and Jill children’s foundation and the Laura Lynn foundation.

“She can’t really move her legs but she can move her hands a little bit. She can’t sit up at all,” he said. “But Nellie’s still able to play with us a bit. She loves Peppa Pig and Mickey Mouse.

“Christmas morning was great for her because we put her down in the middle of a load of toys. She’s perfectly normal from a cognitive point of view.”

“Biogen are operating an Expanded Access Programme (EAP), meaning that the Government will need to agree to try to back this drug, then Biogen will give us the drug next week. They are not looking for money right now but are looking for a nod for reimbursement. That’s my understanding of it.

“If children are getting it in the UK, and other parts of the world can get it, why can’t Irish kids get it as well?”

Dr Declan O’Rourke, a consultant paediatric neurologist at Temple Street hospital who is treating both Nellie and the other young child with SMA1, said Nusinersen had been shown to be safe.

“We’ve never had a product before that’s been able to show clinically meaningful outcomes. For some children with SMA1 to be able to roll and to sit and to walk, this is a major breakthrough for this condition,” he said.

“For families it is starting to provide an immense amount of hope. And anxiety on whether they will get this product,” he added.

“There needs to be swift action as time is running out for Irish patients such as Nellie.”

He said that on average one child in the State is diagnosed with SMA1 each year.

A Biogen spokeswoman said the company was not anticipating approval from the EMA before the middle of this year.

“Even at this stage it is an estimate. Because it has not been authorised we cannot officially start discussions with the NCPE for example in terms of access and pricing,” she said.

She said Ireland was not one of the first countries to take part in the EAP that gives the drug free of charge as it was not originally a clinical trial site.

“What has moved on since then is Temple Street hospital has contacted Biogen to see if they can be a EAP site and Biogen is currently assessing the feasibility and possibility of that,” she said.

“As of yet no decision has been made as those discussions have only just been initiated.”