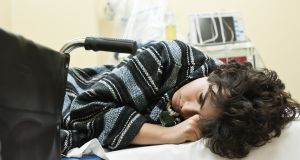 Over 30 patients are treated for self-harm every day in hospitals and a third of cases involve alcohol, new research shows.

Self-harm presentations at emergency departments spike on most public holidays, when the link to alcohol is more pronounced than at the other times of the year, according to the study by Dr Christina Dillon of University College Cork.

New Year’s Day is the worst day of the year for self-harm presentations at Irish hospitals. An average of 56 people are treated in hospital emergency departments on January 1st, almost twice the average of other days.

The role played by alcohol in self-harm incidents recorded by hospitals peaks over Christmas and New Year. Alcohol is a third more likely to be involved in patients who self-harm on Christmas Day, Christmas Eve and New Year’s Day, according to the analysis of public figures by Dr Dillon.

Cases peak out of hours

Alcohol is rarely the only method of self-harm but is often a factor, she said. Irish hospitals saw 11,189 self-harm patients last year, and alcohol was a factor in a third of cases: 34 per cent for men and 29 per cent for women.

Cases tend to peak out of hours, at weekends and on public holidays. One third of people who self-harmed did so on Sundays and Mondays.

The number of self-harm presentations averaged 32 a day and 36 on public holidays over the period 2007 to 2013, according to an analysis by the National Self-Harm Registry.

After New Year’s Day, St Patrick’s Day has the highest average number of cases, with 42, closely followed by the August bank holiday, at 41.

Easter Monday, May Day, the June bank holiday, Easter Sunday and the October bank holiday witness an above average number of presentations. In contrast, fewer than average self-harming patients presented on Good Friday, New Year’s Eve and St Stephen’s Day. Christmas Day and Christmas Eve had the lowest number of cases, at 22 and 21, respectively.

Alcohol was involved in four out of 10 patients who self-harmed over the six-years, but this rose to 46 per cent on public holidays. During public holidays, there was a 17 per cent increase in the risk of alcohol being involved, the study found.

Dr Dillon said the findings support the hypothesis that self-harm rises on public holidays and that alcohol is more strongly associated with self-harm on those days. This trend is more significant and consistent over the Christmas period.

“National strategies aimed at reducing alcohol consumption and misuse should be intensified before and during public holidays,” she said.

Health service capacity needs to be enhanced at specific times and self-harm patients and their families need to be educated about the importance of reduced use of, and access to, alcohol, she says.