Bad side-effects of drugs such as Valium a ‘medical disaster’ 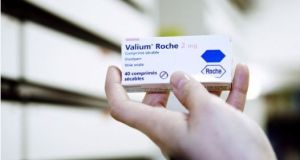 The over-prescription and potential long-term crippling side effects of anti-anxiety drugs such as Valium are described as a “medical disaster” akin to the Thalidomide scandal in a new documentary.

Mr Kenny wrote at the weekend of how he was almost driven to suicide by terrifying and painful effects caused by the Valium which he first took from 2008 as a preventative against Meniere’s disease, an inner ear condition that causes vertigo and vomiting.

The symptoms he subsequently suffered over a period of years, including chronic shooting pains in his legs like “electric shocks”, eventually took such a toll on his health that he was forced to take sick leave from his job in 2008.

The electric shocks have continued to the present day, long after he stopped taking the Valium. *

He said that apart from brief reappearances, including as presenter of RTÉ’s News at One, as government press secretary and as director of public affairs at DCU, his working life ended that year.

In the documentary, Emeritus Professors Malcolm Lader OBE and Heather Ashton describe the often crippling side effects as a “medical disaster”.

Prof Lader says it is “more difficult to withdraw from benzodiazepines than heroin”.

The psychopharmacology experts criticise what they believe is the lack of action by doctors, health authorities and governments on the issue.

It is estimated there are up to 1.5 million in Britain people on long-term prescriptions and up to 4 million in the US. The Health Research Board in Ireland has reported an increase in problem use of sedative drugs in recent years.

“It’s like an illness all over the world of over-prescription of drugs and the reason is partly because doctors don’t think [about] what they’re prescribing, pushing by the drug companies, and not enough research,” Prof Ashton says in the documentary.

The commonly prescribed benzodiazepine family of drugs includes diazepam (such as Valium), alprazolam drugs (such as Xanax) and lorazepam (such as Ativan). The drugs were discovered by Roche in the late 1950s and Valium became the most successful.

In the British Medical Journal in 1984 Prof Ashton listed many symptoms including: pain in the limbs, back and neck, the teeth and jaw, paraesthesia or stabbing pins and needles, inner tremors, muscle pain and twitches, tinnitus, hypersensitivity to sound, light, touch and taste, fits (seizures) anxiety, depression, nightmares, and poor memory and concentration.

“You could compare it to Thalidomide, it is more common, probably, and it’s the health service and the government and, to some extent, the doctors that ignored it, yes,” she says.

Both professors agree that suicides are possible because of the severity of the withdrawal symptoms.

In a statement for the documentary, the British Medical Association says benzodiazepines can cause short- and long-term harm to patients when their prescription and withdrawal is not carefully managed.

“Not enough is known about the levels of dependence and withdrawal and the level of harm that is being caused. There is also too little research about the long-term effects of these drugs.”

Later this month, the body is expected to reveal new guidelines for prescribing doctors, a telephone hotline, and action on facilities to help sufferers.

Mr Kenny will present the documentary before the Royal Television Society at the RTÉ Television Centre on Tuesday at 8pm.

He told The Irish Times it was difficult to speak about the issue and that making the documentary had been a difficult exercise.