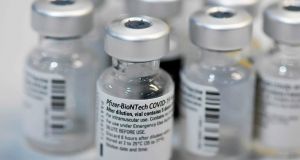 If, six months ago, we had been told that by mid-January 2021 more than 30 million Europeans – and some 2.5 per cent of the Republic’s population – would receive Covid-19 vaccines, it would have seemed unaccountably optimistic. Four years was the previous record for getting a vaccine to market, and inoculations that are safe and effective against some of the worst diseases we live with have eluded the drug industry for decades. Ireland’s rollout campaign is making steady progress, with a substantial proportion of healthcare workers and care home residents having already received at least one jab. In addition to those of Pfizer/BioNTech and Moderna, which are already in use, an easy-to-store vaccine from AstraZeneca is expected to be approved by the European Medicines Agency (EMA) this week while Johnson & Johnson is due to seek the green light for its own, one-shot vaccine next month, assuming positive results in its stage three trials.

Yet Europe is consumed by angst over the state of its vaccine plans. An approval process that has lagged behind those of the United States and United Kingdom and a rollout that has been slow and patchy in places has generated frustration and criticism. Some question the EU’s decision to do collective deals with the pharma giants. Germany is accused of trying to go it alone. Hungary has moved to speed up its own programme by unilaterally buying stocks of Russia’s Sputnik vaccine.

Some of the criticisms of the EU approach are valid, but most are not. European leaders have overdone the argument that this is a marathon, not a sprint. In fact it’s both. The long-term approach must be right, certainly, but the quicker the rollout, the fewer people will die. It would be perverse to think a slow rollout is somehow positive in itself; clearly it’s not, and it must speed up.

At the same time, it’s inarguable that the EU was right to use its bargaining power to strike deals on members’ behalf. The alternative would have been an intra-European dogfight, with the largest and wealthiest members emerging with the biggest stocks. This way, the most vulnerable people in each EU state will receive the vaccine first. The slower approval timeline is due to a deeper model of scrutiny applied by the EMA. Given the scale of the vaccination campaign and the need to reassure vaccine-sceptics, an extra few weeks should not be an intolerable delay.

As always, states that are quick to blame the EU would be better off looking at their own failures. In Denmark, early preparation and impressive logistical coordination has resulted in 3.5 per cent of people having been vaccinated already. France, whose rollout has been ill-prepared and hesitant, is at just 1.5 per cent. The contrasting fortunes of those two EU states suggest that insufficient supply is less of a problem than bad domestic management.