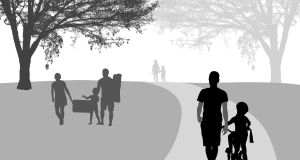 The stabilisers came off her bike a week into lockdown and now she’s Evel Knievel. Photograph: iStock

Sometime midway through 2016, we were on the road to Monaghan when a garda in an unmarked car pulled up behind us and flashed the blue light.

Quick mental inventory. Was I speeding? Not particularly. Had a bulb gone somewhere? Possible, but hardly worth the Hill Street Blues act. Was there a kilo of heroin in the boot? Nah, this was a Tuesday.

“Are you aware that a car with this number plate drove off the forecourt of Applegreen’s in Lusk without paying for petrol?”

“On a Saturday morning three weeks ago at 7.15am.”

“Oh right. Well I have no memory of that. (I genuinely hadn’t.) But it could very well have been me. I take the child for a drive early on weekend mornings to get her back to sleep. Must have been half-asleep myself.”

Our daughter has climbed every tree in the park and only fallen off 80 per cent of them. The stabilisers came off her bike a week into lockdown and now she’s Evel Knievel

I nodded to said child, then about 18 months old, in the car seat in the back. A more brazen, blatant, you-wouldn’t-hit-me-with-the-kid-in-my-hands move has never been witnessed on the side of an Irish road. Garda Littletobedoing rolled his eyes and told me to get on to the garage and sort it out. And I resolved to find a better way to kill an hour with my daughter on a weekend morning.

Enter Tesco. It started as pretty much the only place you can go at half-seven on a Saturday morning and not be met with a steel shutter. Over the years, it morphed into our own little ritual.

And so we measure our lives in the Tesco trolley. At the beginning, she slept in the car seat while plonked in the belly of it. At about two, she graduated to being strapped into the kid seats. By three, she was either sitting with her legs dangling out the front or standing at the prow like Russell Crowe in Master and Commander. At 4½, she was the shopper-in-chief, striding the aisles by herself. I was the money, lucky to be involved at all.

I don’t have a when-she-was-five Tesco anecdote for the simple reason her birthday was in March and she hasn’t seen the inside of a shop of any kind for three months. Basically as soon as she blew out the candles on her cake, the arse fell out of the world. Her creche closed the following week, the play centres shut soon after and the only building she had been in apart from the house is the garden shed.

The lockdown has been such a conflicted and bittersweet parenting experience. The annoying parts are obvious. Every good work day feels like it came partly at the expense of the family. Every good family day feels like you cheated the job a little bit. A friend told me last week she felt like her days were being split: two-thirds on work and two-thirds on the kid. We have all the time in the world and we have less of it than ever.

I haven’t had to put diesel in the car since March. But we’ve gone for three car washes in the past six weeks. Just to be out and about and at something

But the thing is, the good parts are equally obvious. Like most families, this is the longest stretch of sustained time together for the three of us since she started creche at 10 months. It’s obviously exhausting but it’s a lot of fun too. The park near us is a place we really only ever went to visit the playground before now. Since the locks went on the slides and swings bit, we’ve explored every inch of the rest of it.

She’s climbed every tree and only fallen off 80 per cent of them. The stabilisers came off her bike a week into lockdown and now she’s Evel Knievel. She has become obsessed with learning circus acrobatics, my part in which has been to try not to drop her. Any relief my back might have been expecting from the lack of a morning commute has thus been offset.

So we’ve established new rituals, it’s true. But man, I miss the old ones. I miss the handy ways to get herself and myself out of the house for an hour and to go on a bit of a mission together. I haven’t had to put diesel in the car since March because I haven’t had to drive anywhere. But – and this is not a word of a lie – we’ve gone for three car washes in the past six weeks. Just to be out and about and at something.

Time will pass and life will go on. There will be a post-Covid world.

But I won’t know for sure that things are back to normal until we’re heading out the door together some Saturday morning and she’s asking have I a coin for the trolley.