Coronavirus: Ireland warned ‘tens of thousands’ could die if advice is ignored 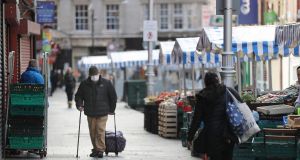 The Covid-19 virus could kills tens of thousands of people if the public does not follow advice to keep apart from others, the Government has warned, as it passed draconian legislation that could restrict the public’s movements.

The State recorded its third death from the virus yesterday, while the first fatality in the North was also announced.

It was a day of stark warnings, both north and south of the Border, with a Government Minister in Dublin saying that almost one in five of the working population may lose their jobs as a result of a virus that has spread across the globe and killed almost 10,000 people.

Taoiseach Leo Varadkar told Fine Gael TDs that school closures could be extended to April or May and later discussed the crisis in a telephone call with the British prime minister Boris Johnson. Despite significant differences in the approach taken in the Republic and the UK, the two men agreed to “align their actions, in so far as possible”.

The Government also announced that it would introduce a rent freeze, and a temporary ban on evictions for the duration of the crisis – measures which will need further emergency legislation.

In Northern Ireland, 77 people have tested positive for coronavirus, bringing to 634 the total number of known cases on the island of Ireland.

The fourth person to die on the island, the third in the Republic, was a woman from the east. The Department of Health said that it had not been told whether she had underlying health issues.

As Northern Ireland reported its first death from the virus, also known as Covid-19, its health minister spoke of a “worst-case nightmare scenario” in which 15,000 could die from the disease.

“The scale of the surge coming towards us is of biblical proportions,” said the North’s health minister Robin Swann.

The State’s chief medical officer Dr Tony Holohan said that the daily-reported increase was in line with expectations and warned that number would continue to rise. It would be the end of the month before the effect of the social distancing measures introduced would be seen, he said.

“In relative terms, these are small numbers compared to where we think we might get to,” he told reporters at the department’s daily briefing on Thursday evening.

“We obviously hope and anticipate that some of the social distancing measures will flatten this growth but expect to continue to see growth in the numbers.”

Briefing Fine Gael TDs in a teleconference of the parliamentary party last night, Mr Varadkar echoed Dr Holohan’s warnings about an expected rise in cases over the coming days.

He also said all of Government was pulling together on fighting the virus. On a more general note, he said the effects of social distancing may not be seen for five to 10 days.

He also informed the meeting that the period before schools can reopen could be extended into April or May.

“The numbers are going to go up. That was his clear message. We will not see the effects of what we do for seven days at least,” said one TD who participated in the meeting.

“This is the critical time period. The next week will be critical if we keep social distancing measures up, we can minimise and avoid deaths,” the TD said.

As the Dáil debated emergency legislation to give the State sweeping powers over the freedom of individuals to stem the outbreak, Tánaiste Simon Coveney said that the political leadership shown to encourage people to protect themselves during the pandemic would determine whether the virus “kills hundreds of people, thousands of people or tens of thousands of people in Ireland”.

The Tánaiste’s stark warning came as Minister for Employment Affairs Regina Doherty said that more than 400,000 people – some 17 per cent of the State’s 2.3 million-strong labour force – could lose their jobs as a result of the pandemic.

“It could be potentially as drastic [as that],” she said. “We have not overused the word ‘unprecedented’ in the past few days but it has been that.”

The Dáil passed the emergency legislation without a vote last night, and the Bill now goes to the Seanad today, where it is expected to pass all stages before being signed into law by the President.