Coronavirus: Ireland to see ramping up of testing amid jump in new cases

Twenty new cases of Covid-19 have been confirmed in the Republic, bringing the total to 90, after nine new cases were discovered in Northern Ireland, with the total there climbing to 29. Video: RTÉ News 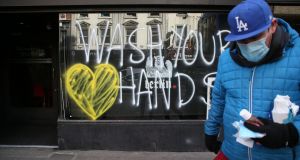 Borders around the world have started to shut as the Covid-19 pandemic worsens and Europe becomes its new epicentre.

Twenty new cases of the disease were reported in the Republic on Friday evening, the second-highest daily jump in the figures. There are now 90 confirmed cases and one death in the Republic, along with 29 cases in Northern Ireland, which reported nine new positive tests on Friday.

Denmark announced it was closing its borders to other nationalities; Canada advised against non-essential international travel anywhere; and the Czech Republic, Slovakia and Malta all announced travel restrictions and quarantine measures.

Italy recorded 250 deaths from the disease in a single day, the biggest increase so far and almost as bad as China’s worst day for deaths in February.

“In light of rapidly changing conditions and restrictions across a number of EU countries, my Department is now advising people to exercised ‘a high degree of caution’ before deciding to travel to other EU States,” he posted on Twitter at 10pm. The Department will continue to update advice, he added.

The advice does not apply to the UK, he confirmed.

Earlier, the department advised against all travel to Italy and all non-essential travel to Spain.

Of the new Irish cases, six are associated with travel, and 12 with contacts of confirmed cases. Four of the latter involve healthcare workers.

The remaining two cases are the result of community transmission.

The largest cluster of cases involve 16 people who have been infected with the virus in a single part of the country.

Public health officials are now saying anyone with a new fever of 38 degrees or more, or chills and/or respiratory tract infection including cough will require testing.

This is expected to lead to a big increase in the number of people needing to be tested. However, GPs will be able to refer patients directly to the National Ambulance Service for testing without having to first consult public health doctors, as was the case up to now.

There also plans to start providing testing facilities in 12 specified centres in addition to people’s homes, officials told a press briefing in HSE headquarters in Dublin.

On Wednesday, the Defence Forces will move to a “status yellow” force posture, with about 330 troops available to aid the HSE response to coronavirus.

About 800 more troops will be available on an hour’s notice under the status yellow, Vice-Admiral Mark Mellet, the Chief of Staff of the Defence Forces, said on Friday.

Amid confusion and some mixed messages about what social restrictions parents should apply to their children, who are now off school, officials urged parents not to arrange playdates for groups of young children for now.

“However, rather than staying indoors, consider outdoor activities such as playing football in the open in small groups of three or four while maintaining social distancing of 2 metres,” said Dr Ronan Glynn, assistant chief medical officer.

A number of doctors on Friday advocated for a stricter interpretation of the rules on mixing.

Dr Glynn said the restrictions on social interactions were not “absolutist” but “if children continue to mix with children as normal, the measures won’t be as effective”.

Meanwhile, chief medical officer Dr Tony Holohan said officials were not telling pubs and restaurants to close as part of the social restriction measures and they were “not talking lockdowns”.

“We’re not locking down the country, I’ve heard rumours of army and gardaí but we have no plans for that,” he said.

The HSE said it was talking to hotels regarding isolation beds, while hundreds of prisoners may be released from jail as the Irish Prison Service warned of “significant challenges” it faced containing the spread of the virus.

Minister for Health Simon Harris and Dr Holohan are due to meet their counterparts in Northern Ireland on Saturday against a backdrop of diverging approaches to the crisis on either side of the Border.

President Michael D Higgins has called on people to work “in a spirit of solidarity and co-operation” in confronting difficulties triggered by the virus.