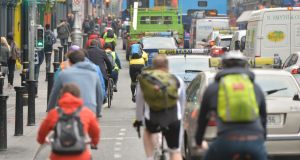 The number of reported bike thefts in Dublin jumped by 46% in June and 40% nationally. Photograph: Alan Betson

Bicycle thefts jumped by almost half last month during the Covid-19 pandemic with thieves profiting from unprecedented demand as people struggled to buy from shops.

The number of reported bike thefts in Dublin jumped by 46 per cent in June and 40 per cent nationally, though the real numbers are much higher since only about a third of all such thefts are reported to gardaí.

Six hundred thefts across the State were reported in June, compared with 428 in June 2019. Dublin, which usually accounts for about 70 per cent of all reported thefts, had 434 robberies in June, up from 297 in June last year.

Thefts in March and April during the height of the lockdown fell by 13 per cent and 19 per cent respectively when people were told to stay at or within two kilometres of their homes.

All crime decreased in March and April, but bicycle theft fell by less than the average amount. However, bicycle thefts jumped dramatically as the State opened up in May, rising by 15 per cent in Dublin and by 9 per cent nationally.

That trend continued in June, but there are signs that bicycle owners are becoming more wary as reported thefts so far this month (88) are slightly down on July 2019 (94).

More than 2,500 bicycles have been reported as stolen so far in 2020, compared with 2,431 last year. Thefts are being driven by thieves trying to fill second-hand demand, says Garda superintendent Liam Geraghty

However, he said there is no evidence that bicycles are being stolen “to order” and most remain opportunistic thefts, helped by less-experienced new cyclists using inadequate locks or parking in risky locations.

Cyclists should buy locks that cost up to 15 per cent of the price they paid for their bicycles, and bicycles should be chained to fixed objects such as lamp posts or railings.

Global demand for bicycles has surged during the Covid-19 crisis, as people avoid public transport or seek new forms of exercise as gyms and team training were unavailable.

Halfords, with 20 stores in the Republic, reported a 57 per cent increase in sales in the 13 weeks to July 3rd for the UK and Ireland, while sales in France between May 12th and June 12th jumped by 117 per cent.

In Ireland, the new Decathlon store in Ballymun, in Dublin, sold 500 bicycles in its first 10 days , while Cycle Superstore in Tallaght, the largest bicycle shop in the country, is now dealing with 1,200 calls a day.