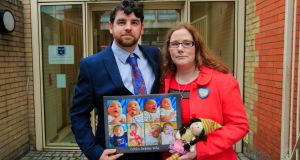 A cold sore virus which cost a 12-day-old baby her life three years ago has been made a notifiable disease by the Government, which will give medical professionals more scope to investigate and control it.

Eibhlín Wills died after contracting the virus, officially known as neonatal herpes simplex virus type 1, in hospital. Dublin Coroner’s Court heard in October how she acquired the infection in the first five days of her life.

Blood tests had shown no sign of the infection three days after her birth, but the infection was present in samples taken at five days. Her family described the loss of Eibhlín to a “preventable disease” as an “unspeakable horror”.

The virus is highly contagious and can be easily passed from person to person by close direct contact. In newborn babies or people with weakened immune systems, such as those with cancer, cold sores can on rare occasions be life-threatening.

Coroner Dr Myra Cullinane recommended the virus be made a notifiable disease to help achieve an exact indication of its prevalence.

By making the virus “notifiable”, all medical practitioners, including clinical directors of diagnostic laboratories, will now be required to notify the medical officer of health of instances of the virus.

That information is then used to investigate cases and prevent the spread of infection and further cases.

It also facilitates the early identification of outbreaks, and is used to monitor the burden and changing levels of diseases, which can provide the evidence for public health interventions such as immunisation.

The move by the Government was contained within the Infectious Diseases (Amendment) Regulations 2018 Act which was signed into law by Minster for Health Simon Harris on Tuesday.

Mr Harris signed the regulations in the presence of John and Louise Wills, parents of Eibhlín, who have campaigned for the move since their daughter’s death.

“The loss of an infant is something that most of us cannot even begin to come to terms with, much less turn into something positive,” said Mr Harris. “That is what makes the work of both John and Louise so extraordinary and powerful.

“I hope that the inclusion of neonatal herpes simplex among the diseases that are notifiable will help, in some small way, to increase public awareness of this disease and the danger that it can represent to newborns.”