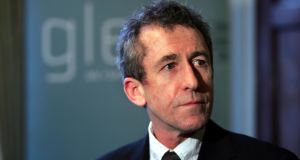 Kieran Rose, founder and former chairman of Glen: Admitted his decision to use the charity’s resources and facilities during an unsuccessful Seanad election campaign last year was a mistake. Photograph: Eric Luke

The founder and former chairman of the Gay and Lesbian Equality Network (Glen) has described its decision to close as abrupt and premature.

Kieran Rose, who stepped down from the board last month after controversy over financial management at the gay rights charity, said the winding-up of Glen will be a “huge loss” to the community it serves.

The outcome of the controversy was “disproportionate” to the issues that had arisen and was also “rough” on staff who have been let go, Mr Rose said.

“People have been left slightly bereft, as though the rug has been pulled from under them.” He suggested the wider gay community should have been consulted before a decision was made to wind up the organisation.

Glen was already considering its future, and the possibility of a merger with other groups or becoming a membership organisation, before the controversy erupted last month, he said. “Now all these possibilities have been abandoned.”

Mr Rose said he did not believe the existence of up to seven staff credit cards constituted “a hanging offence” as long as they were used for Glen business. A report found the cards were used by staff for personal purchases, which were later reimbursed.

One of the cards was in his name, but Mr Rose said he never asked for or used it.

He admitted his decision to use Glen resources and facilities during an unsuccessful Seanad election campaign last year was a mistake.

“It seemed like a good idea at the time. I thought it would make it easier to respond to the Standards in Public Office Commission [Sipo] by putting everything in one invoice.” The charity was later reimbursed for the €11,500 spending involved.

Mr Rose said he did not inform the Glen board about the campaign but his activity in the office was not hidden or concealed in any way.

He said he is engaged with Sipo about the matter. Sipo and the Charities Regulator declined to comment on their interactions with Mr Rose or Glen.

The board of Glen has ordered a wind-up of its affairs after a consultant’s report found the organisation was no longer viable because of the multiple challenges it faces.

“We did make mistakes, but then lots of organisations do,” Mr Rose commented.