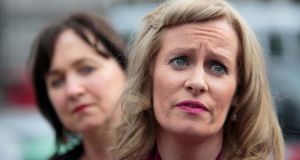 Fianna Fáil’s Niamh Smyth said: “This has caused considerable shock to the staff, patients and residents in Counties Cavan and Monaghan”.

Midwife representative groups have called for the protection of midwifery-led maternity units (MLUs), adding that the closure of the units would lead to “a significant lapse” in the provision of maternal healthcare.

The Midwife Association has claimed that the MLU in Cavan General Hospital, one of only two in the country, is being merged with the consultant-led unit.

The unit, which is made up of a team of midwives who provide care for women throughout their pregnancy, during labour and in the postnatal period, helped deliver around 300 babies last year while the other midwife-led unit in Drogheda, Co Louth assisted in the delivery of around 600 babies, and has had to start turning away people.

Patricia Hughes, chairwoman of the association, said: “The autonomy and the pathway of care has effectively been removed from all women booking from the first of June, last Monday.

Ms Hughes added that she understands some 85 to 90 women are currently attending the MLU and there is “no issue with them finishing up their care in the MLU”.

The association said there are many “significant repercussions” to removing midwifery-led care.

“The repercussions are many. First of all, it’s very cost-effective, safe method of antenatal and post-natal care for mothers. The benefits are well documented in research in terms of continuity of care,” she added.

The Irish Nurses and Midwives’ Organisation (INMO) has also called for the protection of the country’s MLUs.

The INMO said it had previously been assured by hospital group management that full consultation would take place before any decisions on the future of the service were made.

They added that “despite this”, “plans to downgrade the service are advancing”.

David Miskell, Industrial Relations Officer with the INMO for Cavan General Hospital said there is a “very clear” strategy for the maternity service.

“The expansion of midwife-led care is an integral part of the National Maternity Strategy. Downgrading the service would fly in the face of national policy,” Mr Miskell said.

“Any diminution in the service provided at Cavan General Hospital is a retrograde step for the provision of maternity services in the North East and is limiting choices for expectant mothers.

Fianna Fáil TD for Cavan-Monaghan Niamh Smyth has sought urgent clarification from the Department of Health regarding the future of the MLU.

“I understand the unit is set to be closed. This has caused considerable shock to the staff, patients and residents in Counties Cavan and Monaghan,” Ms Smyth said in a statement.

The RCSI Hospital group, which represents Cavan General Hospital, did not respond to a request for comment at the time of publication.