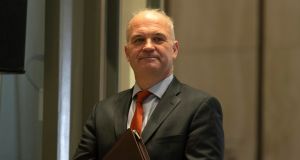 There is no fate but what we make for ourselves.

Those were the words of Leo Varadkar some 30 weeks ago when he announced the first lockdown of the coronavirus pandemic. The message was crystal clear: we had to forego our personal liberties and freedoms for a greater cause. The virus was spreading, it had to be curbed, and so in the spring the public took to the measures with gusto.

Now, as we face a second lockdown on winter’s doorstep, the stakes are much higher. Billions have been borrowed and spent, the public has grown weary and the solidarity between Government and public health officials has frayed.

Behind closed doors, this is how the State moved back towards lockdown.

It started on Saturday morning. A high-powered panel of politicians gathered to discuss the latest dour warnings from the National Public Health Emergency Team (Nphet). Prior to this, a private meeting was arranged between Taoiseach Micheál Martin and the two men responsible for guiding the State’s response to the pandemic, Chief Medical Officer Dr Tony Holohan, and his deputy, Dr Ronan Glynn.

Following this behind-closed-doors meeting, the medics were joined by Prof Philip Nolan, chair of the Irish epidemiological modelling group, and also a senior member of the National Public Health Emergency Team (Nphet).

Those familiar with Nphet’s presentation say it focused on three key points: firstly, the level of concern on Nphet over the headline numbers and the trends they were seeing. The health officials also impressed that action was needed, and soon.

There was also a discussion of what mathematical models devised by Prof Nolan had suggested in recent weeks, and how it had been borne out. More importantly, they emphasised that these reliable models showed significant increases in hospitalisations and case numbers in the weeks to come. This was an effective doubling down of public warnings delivered in recent weeks - but hammered home, face to face.

Talk turned to the how the “R” number, which shows how quickly the virus is spreading, had deteriorated.

Reid then spoke to the group. Sources say his presentation had five main points. The first was that the hospital system is coping for now but concerns were growing about a trend of rising admissions. Secondly, those concerns were particularly related to more cases emerging in those over 65. The length of time that Covid patients spend in hospitals, and the knock on impact that has, was then discussed. Ministers were told that increasing Covid-19 cases were impacting elective care in some hospitals. In relation to intensive care units, Mr Reid said that while they were coping there was a risk of increasing hospitalisations.

The discussion covered a significant amount of ground, according to those present. The possibility of cases bouncing back up again after measures were relaxed, and the risk of yet another lockdown in January, also featured.

There were other important topics up for conversation, particularly in relation to the social ramifications of another lockdown. Domestic violence cases rose by almost half in the last lockdown, and likely would again. Constraints on services to ensure child welfare were likely. Households could expect to struggle with mortgage payments again.

Issues around compliance with the rules, and enforcement, were also ventilated. Ministers pushed back to some extent, arguing for clearly defined metrics on what constituted success and when unlocking could take place. There was resistance to the six week element of the recommendation. Even on Sunday night, senior ministers believed four weeks at an enhanced Level 4 was the most likely outcome.

Then there was the economic impact to count. Level 5 restrictions could put another 167,000 people out of work, adding €47 million a week to pandemic unemployment payment costs, and would cost the State more than €1.2 billion overall in supports under a six-week lockdown.

Saturday’s meetings also brought the spotlight back on the tension between Government and public health.

Speaking before it emerged that Level 5 was to be considered by Government, senior health sources spoke “denial” in Government and political systems around Europe that are “struggling to face the reality” of exponential growth. They believed that the virus is out of control, and must be suppressed with restrictive measures.

There was also comparisons made by politicians to ICU occupancy and hospitalisation numbers in the spring have rankled, as sources are adamant that deaths and higher critical care loads will follow. Meanwhile, they say a longer, unpredictable lockdown would be necessary if 2,000-3,000 cases a day are seen.

The meetings wrapped up late on Saturday. The next morning Leo Varadkar briefed Fine Gael ministers while Taoiseach Micheál Martin was briefing line ministers well into the evening on Sunday, sources said.

On Monday morning, Ministers scrambled to organise different aspects of the State response to the looming lockdown. There were meetings in Merrion Street between the finance ministers, senior civil servants and advisors. The mood in Government Buildings was sombre.

There have been last minute meetings on mental health too, with recommendations sent to cabinet that a package of supports be progressed. Minister of State Mary Butler briefed Stephen Donnelly on services’ capacity to handle the fallout.

In this area, it is hoped that the performance from the first lockdown period, which saw 90 per cent of services maintained, will be repeated.

“I think we’re better prepared now, but we do not know what kind of a surge we might see of people looking for mental health supports. That’s where my concern would be, because that’s something we can’t predict,” Ms Butler said.