Donegal lamb meat infected by sarcocystosis, which can be transmitted to humans 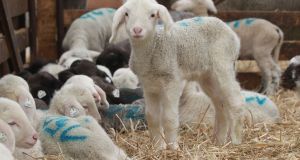 A spokesman for the Department of Agriculture, Food and the Marine said that as a consequence of actions taken by veterinary inspectors, there was believed to be no danger to human health. Photograph: Sean Gallup/Getty Images

Authorities have confirmed that contaminated lamb meat, which has been infected by a disease that can be transmitted to humans, has not got into the food chain in Ireland.

The outbreak of sarcocystosis, which originated in Co Donegal, led to more than 400 sheep carcasses being condemned at a number of meat plants around the country in recent weeks.

A spokesman for the Department of Agriculture, Food and the Marine said that as a consequence of actions taken by veterinary inspectors, there was believed to be no danger to human health. There was no indication that meat consignments for sale in Ireland or for export out of the country had been contaminated. There have been no cases of human infection linked to the outbreak.

Humans can contract the disease from eating undercooked meat infected with the parasite that causes the disease. It is more prevalent in countries where raw meat is commonly consumed.

Lambs contract sarcocystosis from dogs, foxes and other wildlife who in turn get it from eating offal containing the parasite. It is mostly detected after animals are slaughtered. Symptoms of the condition in humans include stomach aches, nausea, headaches, fever and diarrhoea.

The department “operates a comprehensive system of ante- and postmortem inspection on all animals slaughtered in Irish meat plants”, the spokesman added. “Where animals fail to meet the required standards, they are excluded from the food chain.”

The diseased animals have been traced and the cause of the problem has been diagnosed as sarcocystosis, he said.

The department declined to say if a prosecution would be brought following the outbreak. It also declined to give the number and locations of meat plants where infected carcasses were detected, or indicate if infected lambs had been linked to more than one farm in Co Donegal.

It has restricted the flock where the outbreak is believed to have originated, which means sheep from that location cannot be moved or sold. It is understood a large number of the carcasses were condemned at a meat processing plant in Co Mayo.

The Food Safety Authority of Ireland said it believed the outbreak had originated from “one event”. It was satisfied “the control system worked in that the problem was identified at postmortem examination and the meat was prevented from entering the food chain”, a spokeswoman said.

The disease is uncommon in Ireland, she added, as evidenced by the fact that it is not on the list of “notifiable infectious diseases”. Cases in humans may be asymptomatic, while proper cooking eliminates the risk, the FSAI spokeswoman pointed out.