A blizzard run in Dundalk with ‘little hailstones lacerating my face’ 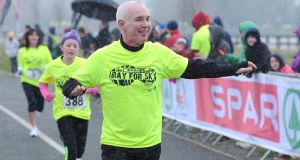 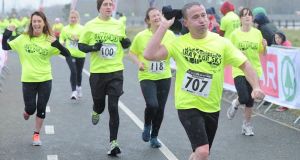 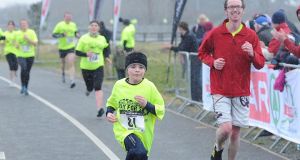 Q Will you come over to Ireland to run 5k with Ray in Dundalk on Holy Thursday?

A Sure thang. On two conditions: 1. I am kept distracted from the potentially inclement weather by a brilliantly amusing comedian; and 2. I am further distracted from the potentially inclement weather and kept entertained with live music from an amazing band (and get to gawp at eye candy worthy of America’s next top model throughout).

Ray D’Arcy [Today FM presenter] and his “staff” were more than happy to oblige, and so I found myself at 10am on Holy Thursday having coffee in a makeshift radio station in Dundalk and being entertained from all angles by a hilarious Pat Shortt and an insanely good-looking Bressie and his band the Blizzards’ brilliant new album Rage and Romance .

Hurt to breathe in
I was – as I always am – dreading the run, and the walk up to the start confirmed my fears.

To describe it as inclement weather would be a massive understatement; it was nothing short of Siberian, and it actually hurt to breathe in.

I have always been a fan of running solo. Part of its real beauty – for me – is that it is just you against yourself, against whatever weakness your body may be labouring under that day (be that a hangover, a large roast with all the trimmings, or unwilling calf muscles – to name but a few).

But doing a race, even a very friendly one without race chips etc, is every bit as confronting.

There is nowhere to hide, nowhere to run (pun intended); you cannot cheat and you will always get precisely out of the run what you have put in during the days and weeks leading up to it – unlike a game of football or netball in which your team may win despite your raging hangover because the rest of the team can compensate for your poor performance.

Every step counts
Not so with running. Every step counts towards that finishing time, and no one else can take a single one of them for you. Every stride you take in the race counts as does every single step leading up to it in preparation.

If you slow down, if you don’t give 100 per cent, you will lose. End of story. It is the ultimate challenge in honest sport. Which is why it is so wonderful to see people of all levels of fitness and at different stages in their running journeys daring to join in. It is so brave because it leaves you truly exposed.

And the brilliant thing about running in a group race which I always rediscover as if for the first time – every time – is that the group inevitably propels you onwards faster, as if you are made more powerful from your participation in a group.

And so much more joy in the aftermath – a joy that is multiplied precisely for being part of a bigger, team effort.


Gritty conditions
Back to Dundalk. Gritty comes nowhere near to describing the conditions at the start of our 5k run with Ray. As the mountainous snowy backdrop at the starting line hoved into view, I berated myself for not wearing warmer clothes, hat, scarf, gloves, and so on.

I had Pat Shortt to keep me company over the first kilometre or so, as we struggled to breathe in the freeze.

Thank God, as I needed a laugh, which was also inadvertently provided by Ray: a vision in shorts bouncing around for ages both before and after the race like a deranged puppy.

I abandoned Pat, who gallantly told me to run on and his timing was perfect as I felt as though I had broken the 10-minute mark (when every sinew in your body is just screaming for it all to end).

Thank God, because almost as if on cue, the biting wind and icy cold air was replaced by what can only be described as a light blizzard, tiny little hailstones lacerating my face as I ran into its full force.

Sheer agony
I cursed the Lord himself – whose agony in the Garden of Gethsemane could surely not compare to this.

Suddenly, the finishing line hoved into view, it was at least a kilometre away, probably more, but I could see it and that was enough to spur me on.

I sped up, picking off runners all the way to the finishing line and was then whisked off back into the warmth, leaving Ray chatting to the participants, and Pat – who I feared had likely died in the blizzard.

Into the warm bosom of the hotel and then some warm soup and sarnies with Ray and his wonderful team, complete with all that inspired and enthusiastic chat which always follows a race.

Wonderful feeling
We were all aglow, and a million times more so because of the blizzard. I felt wonderful, so pleased to have come to Dundalk, so honoured to have been asked, and so miffed that Pat Shortt’s celebrity so far exceeded my own.

It was the perfect way to start the Easter weekend – a blizzard run in Dundalk. Nothing was going to faze me after that.