Everything is very far from rosy in the garden

Gardeners are only emerging from hibernation as the flower shows begin 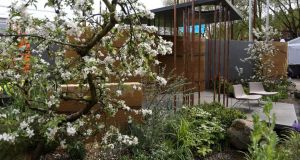 One of the pavilions at the Chelsea Flower Show in London. Photograph: Tim P Whitby/Getty

The Chelsea Flower Show, which is the World Cup of gardening, starts today. Bloom, the Irish garden festival, runs over five days around the June bank holiday.

To say that times are tough in the gardening world is to put it mildly. It is hard to think of a properly illustrative parallel here. Let’s just say that running the Chelsea Flower Show and Bloom in the current climate – both psychological and meteorological – is a bit like running the Masterchef final in a country that is running out of food.

Gardeners are only emerging from their winter hibernation now – more than two months late. “Is it spring?” asked one gardener plaintively. “What are they saying? Has it started? Is this it?”

A freezing March obliterated two of gardening’s biggest deadlines – Saint Patrick’s Day and Easter. It was too cold to plant anything out.You couldn’t even go out and scratch around in the dirt – a gardening basic. Even your most inadequate gardener felt frustrated. No wonder we hit the drink.

Figures from the Retail Excellence Sales Review for the first quarter of the year showed garden centre sales down by 25 per cent on the previous year, the same as in Britain. Some estimates for the trade in Ireland make that drop much steeper.

“March was terrifying,” says Anne McKenna of the Garden Centre Association of Ireland. “But we had a very nice few days at the beginning of May, which were like the start of spring. People flocked to us then. I know that the interest is there.”

The independent garden centre owners are an optimistic lot, according to McKenna. But after three tough years of what she calls very challenging conditions, she describes the business as having “no reserves”.

The bad weather has been more harmful to garden centres than the economic disaster. It has shut off the gardening population with some savagery. It has been terribly depressing.

“You still have seed trays inside even now,” said one good gardener.” You’re terrified to put your seedlings out in case they get hailed on, or blown by the wind. I’m not having to cut the grass so much so perhaps that’s a good thing. Although not for the farmers.”

There is a sort of malaise in gardeners now which can’t be good for them – I mean us.

“I didn’t even do my planning in January and February,” says the good gardener. “I didn’t even move things, and it’s too late now. And I haven’t bought a single thing, except for a packet of seeds in January.”

This good gardener and the thousands like her are being watched very carefully by the gardening industry of retailers and growers. The biggest fear for the industry is that it’s going to miss a whole season.

The hardier plants, from nurseries all over the country, are sold at the beginning of the season, which this year was a disaster – not that the previous two years were much better.

The bedding plants – so many of which are grown in Ireland – are on sale now. The bedding plant growers work to a tight schedule and are very worried indeed. They have a narrow window in which to sell, and it is closing fast.

It is for this reason that so many hopes are being pinned on the garden festivals. In Britain retailers are hoping for something called the “Chelsea boost” to lift sales.

The Chelsea Flower Show celebrates its centenary this year. It brings all sorts of ideas to gardening. In the past Chelsea has displayed a garden modelled on the demilitarised zone between north and south Korea. Chelsea’s preciousness and quivering perfection are a bit irritating, but the show itself has a very real impact on the market. It’s hoped that the “Chelsea boost”“ will send people back to their gardens and to their garden centres.

“We don’t get a big pick-up from Chelsea,” says McKenna. “Bloom has a far greater impact for us.” After all, Bloom usually draws 80,000 visitors over five days, all slavering over plants.

But still the clock is ticking. The norm seems to be that if people haven’t bought their garden plants or garden furniture by the time they go on the summer holidays then they don’t bother buying anything for the garden that year. Bloom, which starts on Thursday, May 30th, falls on the cusp of that decision-making process.

Looking at slugs
Meanwhile, back in your actual garden you are left kicking stones and looking at the slugs. (I had a tray of sunflower and stock seedlings eaten on the May bank holiday weekend – is this a record?)

McKenna, on the other hand, is optimistic, and the market is not entirely moribund. Sales for herbs, fruit and vegetables are up by 77 per cent. Although, mind you, hardly any Irish people grew vegetables 10 years ago. Now, she says, “ I see polytunnels popping up all over the place”.

Irish company paid €1.2m a year by collapsed Blumenthal-linked Australian restaurant 03:45
Hugo MacNeill steps back from Goldman Sachs role 03:15
Most dangerous stretches of road for motorists are all located in Dublin 03:00
One of Ireland’s largest law firms has no office here 02:45
Public funds of €25m sought for Dublin library 01:38