Why rivers are crucial to our relationship with the environment

The flow of water through a landscape tells us a great deal about the places where we live. And water is the vital link between all the ecological and human communities within it 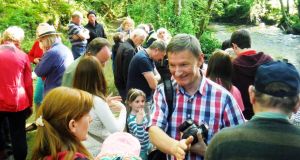 On the Knappagh river, Monaghan: the Bawn Latton community group take part in a StreamScapes project

What river catchment do you live in? What condition is it in? If pressed on the first question Dubliners would no doubt guess the Liffey, Corkonians the Lee, and so on. But the second question is hardly one to which most of us give much thought. That is likely to change over the next few years as the EU’s water-framework directive kicks in.

The catchment (or watershed) is increasingly recognised as the most useful unit for environmental management – much more relevant than traditional administrative units such as the county, whose borders only rarely and erratically correspond to natural boundaries.

The flow of water through a landscape, following its natural contours and responding to its underlying soil and geology, tells us a great deal about the places where we live. And water is the vital link between all the ecological and human communities within it.

Bad water quality in a catchment indicates an environmental problem, and will usually conduct that problem to everything downstream of its source. The main causes of bad water quality in Ireland today are agricultural run-off (53 per cent) and poorly treated human waste from urban centres (34 per cent).

The aim of the watershed directive is to ensure good water quality in every catchment in the EU. Apart from the obvious health benefits the directive will create a much more detailed monitoring system for general environmental conditions than has been available previously.

It could also become a catalyst for developing a much more fruitful – and intimate and enjoyable – relationship between local communities and their environment if the holistic vision now guiding its implementation here is fulfilled.

“Integrated catchment management connects land, water and people from the mountains to the sea,” Donal Daly, head of the Environmental Protection Agency group responsible for the directive, told a workshop in Dundalk last month.

Daly’s vision places people rather than ecosystems or biodiversity at the centre of this connectedness, a view often underappreciated by environmental policymakers. As people are now the main custodians of ecosystems and biodiversity, what he is proposing may simply be uncommonly common sense.

His approach is especially appropriate to this directive. This law is a direct response to public demand, as water quality is the main environmental concern of EU citizens. Unusually, the directive specifies that member states should improve water quality through “consultation and involvement of the public”.

The initial stages of implementation have been largely technical, gathering basic data and setting up management groups for seven river basin districts – supercatchments, if you like – across the country. But the OECD has already criticised Ireland for failing to engage local communities in this process.

Daly is mindful of the disastrous failures to consult communities adequately about the implementation of earlier EU legislation in Ireland – think turf-cutting and special areas of conservation – as well as the more recent debacle of Irish Water. He is eager to promote active citizen engagement through the remaining steps of the directive’s development.

The water management and community participation workshop, organised by Alec Rolston of the Towards Integrated Water Management project at Dundalk Institute of Technology, brought together technical specialists, local authorities and NGOs to discuss how best this might be done.

Among several projects and experiences discussed at the event, the Environmental Protection Agency published a report that condenses 25 years’ remarkable experience in this field, Public Engagement in Integrated Catchment Management, by Mark Boyden of StreamScapes, an aquatic and biodiversity education project.

Back in the late 1980s Boyden was already thinking of the catchment as a key unit, not only for environmental management but also for community environmental awareness. With Paul Kearney, Boyden had been producing native salmon to stock Irish rivers on the Coomhola in Co Cork. He realised that such endeavours would prosper in the long term only with the support and understanding of people whose lives and livelihoods affect local water quality. So he set up the StreamScapes environmental education project.

Boyden is the kind of very focused but quietly spoken man to whom people tend to listen with great attention. And he does a lot of listening himself when working with communities. As his projects are participant-led, he says, in one sense he has “no technique, because the participants may lead the project in an unexpected directions”.

His starting point is always a meeting on the river. In the open air, water, plants, birds and animals spark spontaneous conversations between people who might not talk so easily in a meeting room. Labels like “farmer”, “environmentalist” and “local official” become less significant, as people begin to share interests and experiences. “We are there in the first place,” says Boyden, “to celebrate the river and the human community that lives around it.”

The pleasure involved is evident in the quirkily humorous drawings that are the core of the informative pamphlets each project eventually produces.

Bernie O’Flaherty, who works with communities on water-quality issues for Monaghan County Council, told the workshop that a sense of fun was central to her experience of working with StreamScapes. “We found we could hardly get the children away from the river,” she said, once they had been introduced to its diversity of life.

The challenge facing Daly, the Environmental Protection Agency and their collaborators is improving the status of all water bodies to “good” or “high” by 2027 – and keeping them that way.

Given the potentially huge pressure that our agricultural expansion plans and urban growth are likely to put on our water systems, that will not be easy. It will probably happen only if we all become a lot more aware of the way our lifestyles affect catchments where we live.