What is this bug my son found on Killiney Hill? Readers’ nature queries 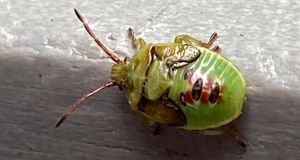 Nymph of the Juniper shield bug

My six-year-old son Cilian found this bug on Killiney Hill. He thinks it’s beautiful.
Doug Carruthers, Killiney, Co Dublin
An unusual find, it’s the fifth and last stage of the nymph of the Juniper shield bug before it becomes an adult.

While washing lettuce I found this larva attached by a threadlike link to a leaf. It had lovely gold patches that really glistened.
Agnes Coleman, Cappamore, Co Limerick
The pupa of the small tortoiseshell butterfly has golden patches.

This fish was found by the Stevenson and Moloney children on Cadogan’s strand in Schull in August. It was identified as a tub gurnard, but is that definite?
Denise Caruth-Stevenson, Schull, Co Cork
Definitely a gurnard, and at that size more than likely a tub gurnard. It could grow to 75cms.

This insect was sitting on a cupboard door handle in my kitchen, It had a wingspan of about 1cm.
Jill Bolton, Shankill, Dublin 18
It’s one of the micro moths, called the beautiful plume moth, Amblyptilia acanthadactyla.

I found this creature washed up on the White Strand south of Louisburgh, Co Mayo. Is it a turtle and where do they come from?
Denis Harte, Drumcondra, Dublin 9
It’s a leatherback turtle and they travel all around the Atlantic from the Caribbean, where they breed, following their food source, shoals of jellyfish.

Can you tell me about this jellyfish which we found on Gurteen Beach, Co Galway, this summer?
Alex O’Neill, Kilcullen, Co Kildare
It’s the compass jellyfish, just the cap; the tentacles and arms were lost before it landed.

This spider is living in my kitchen window. What kind is it and how long do they live?
Isobel Butler, Harold’s Cross, Dublin 12
The garden spider won’t live outside for more than one year; inside she can last for two or three years.