Water use plummeted over fear of charges, data suggests

When charges were first to apply in October, use fell 20m litres daily in Dublin region 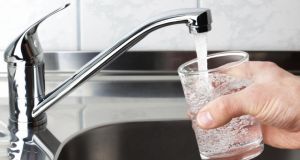 Figures obtained from Dublin City Council’s engineering department, but applying across Dublin region - which takes in one-third of the State’s population - show water usage was at its peak last September, which was to be the last month of free water. File photograph: Getty Images/iStockphoto

Water consumption plummeted across the Dublin region when charges were introduced last October, but rose again the following month when the Government changed its charging plans.

Figures obtained from Dublin City Council’s engineering department, but applying across Dublin region - which takes in one-third of the State’s population - show water usage was at its peak last September, which was to be the last month of free water.

Water charges were to apply from October 1st. Households with meters would pay €4.88 for 1,000 litres of water. Those still without meters would be on an assessed rate starting at €176 for one adult, with an extra €102 added for every additional adult.

“The drop in demand around 1st October 2014 was quite noticeable, and leaving out normal seasonal and demand variability, is quite noteworthy and indicates the impact of customer conservation measures on demand and water use,” said Pat Cronin, an executive engineer with the council.

Water usage had dropped from an average of 543 million litres a day to less than 524 million litres in October, making it the month when most water was saved last year.

However, the conservation effect didn’t last.

At the start of November it emerged the coalition was considering maintaining a fixed charge, instead of pay-by-use rates, until 2018.

By the middle of the month it had been confirmed water charges would now not apply until January 2015.

On November 19th, Minister for the Environment Alan Kelly announced a fixed charge of €160 a year for single people and €260 a year for a multi-adult household until 2018.

In addition, anyone who registered with Irish Water would get a €100 water conservation grant.

“The figures would suggest that if the charge isn’t usage-based, you won’t get a change in behaviour.”