Dublin sites owned by OPW sell for €5.6 million at auction

Councillors had called for sites to be retained by State 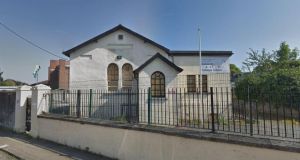 The former model school on Church Avenue in Glasnevin sold for €870,000.

A Dublin city-centre car park overlooking the Grand Canal, owned by the Office of Public Works (OPW), has sold for almost twice its guide price at auction.

The 34-space car park at Herbert Lane had a guide price of €2.46 million but sold for €4.75 million. It was one of two OPW properties sold at auction in the Conrad Hotel on Tuesday.

The second property, the former model school on Church Avenue in Glasnevin, sold slightly above its €825,000 guide price, making €870,000 for the OPW.

The old school, built in the 19th century, sits on a 1,600sq m site close to the Bons Secours Hospital. Dublin city councillors on Monday night voted to assess the school, one of the last remaining Victorian model schools, for addition to the Record of Protected Structures (RPS).

People Before Profit councillor John Lyons, who proposed the motion, said the building should be protected from demolition.

“It is quite unbelievable that such an historic building, a school built more than 150 years ago during the Famine era that would put a lot of recently-built school buildings to shame in terms of its quality, currently has no statutory protection,” he said.

“I believe the model school should be assessed in terms of its architectural, heritage and historic value and should be afforded the protection of being added to the Record of Protected Structures list.”

The councillors’ request to add the school to the list will be assessed by council planners and conservation officers before a determination on whether to add it to the RPS is made. The property is currently zoned under the Dublin City Development Plan 2016-2022 to “protect, provide and improve residential amenities”.

Workers Party councillor Éilis Ryan said neither site should have been put on sale.

“It is extraordinary that at the height of the housing crisis we wake up to yet another story of the State selling off the family silver – when land for housing is so desperately needed,” she said. “In tackling the housing crisis, the key asset which the State has to work with is the land it owns. Once this is gone, any possible solution will be doubly difficult to achieve.”

Selling agent Lambert Smith Hampton said the car park was bought by a corporate investor while the school site was sold to a developer.