They're man o’wars, not jellyfish, but they're still horrible 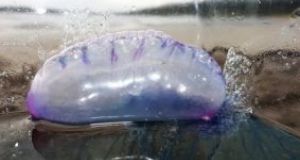 Bathers have been urged to exercise extreme caution after Irish Water Safety warned of the worst Portuguese man o’war infestation off Irish coasts in over 100 years.

A combination of tropical air and slack northerly winds have led to the waters off the west coast warming to 15 degrees over recent months, creating an ideal setting for the venomous organisms - which are not technically jellyfish, despite looking like them - to thrive off the western seaboard.

Abnormally large numbers of the marine animals have been washing up on Irish beaches in September, with sightings recorded in counties Cork, Kerry, Galway and Mayo, all the way up to Donegal.

Over 80 landed on Cape Clear Island off the southwest of Co Cork in a short space of time, according to Irish Water Safety, which also received reports of 20 washed up on Keel Bay in Achill.

Spring tides caused by a new moon on Saturday will see larger areas of the coast exposed to man o’ war, and beach-goers in the south, west and northwest have been warned to avoid them.

Despite its outward appearance, the Portuguese man o' war is not a jellyfish but a siphonophore. Unlike a  jellyfish, it is not a single organism, but is a colony made up of specialised individual animals called zooids or polyps.

The stingers of the Portuguese man o’war remain venomous even after death, and contact with the skin can result in severe repercussions up to and including death.

“Surfers, kite surfers, swimmers, kayakers, divers and walkers need to keep a vigilant eye open for these creatures which give a very strong sting and to some people can cause anaphylactic shock or seizures,” read a statement from Irish Water Safety.

It also issued the following advice for members of the public who come in contact with one of the creatures:

• Ensure you don’t get stung yourself when aiding others.

• Remove any attached tentacles with a gloved hand, stick or towel.

• Do not rub the affected area, this may result in further venom release.

• Rinse the affected area with sea-water - do not use fresh water, vinegar or urine.

• Apply a “dry cold pack” to the area - ie place a cold pack or ice inside a plastic bag and then wrap this package in a t-shirt or other piece of cloth.

• Seek medical attention if there is anything other than minor discomfort. Note the sting can cause anaphylactic shock, if you are feeling unwell go to A&E for treatment.