Temperatures soar as tomorrow looks set to be even hotter

With highs of around 29C, Dubliners are coming out in force to enjoy the good weather. Video:Darragh Bambrick

Dramatic scenes on Dollymount strand in Dublin from mid morning as onshore breezes blew in a dense sea fog generated by warm weather in the Irish Sea. Video : Bryan O'Brien . 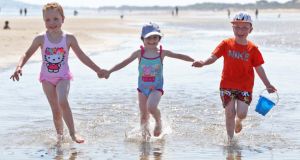 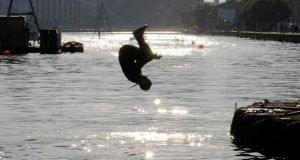 A local teenager enoying the hot weather dives into the Grand Canal Basin in Dublin yesterday. Photograph: The Irish Times 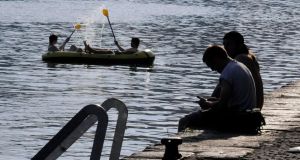 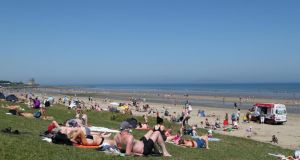 Ireland’s hot weather is set to continue today reaching 27 degrees and tomorrow is expected to be even hotter.

In the latest temperature recordings around Ireland Tyrone has reached 26 degrees at 3pm, Oak Park in Carlow and Moore Park in Cork 25 degrees.

The hottest place in the country yesterday was Mullingar, Co Westmeath, where temperatures hit 26.8 degrees.

At 8am this morning, temperatures in Dublin’s Phoenix Park had reached 20 degrees.

“It looks likely it will hit 27 degrees,” she said.

“Tomorrow we could have the hottest day of the year. We had some cloud here this morning but tomorrow is sunnier.”

This evening the forecast predicts the weather will remain very warm and close.

However, there will be heavy showers or thunderstorms, with some on the spot flooding.

The showers will mostly die out by early tonight with minimum temperatures of 12-16 degrees.

Ireland is keeping pace today with the temperatures European cities with Rome at 27 degrees, Paris at 29, London 28 degrees and Madrid at 35 degrees.

The hottest day of the year so far was June 17th, when the mercury hit 27 degrees in Co Mayo.

Similar levels were recorded in Carlow and Tipperary although according to Met Éireann, the really interesting place was Malin Head, Co Donegal where temperatures fell just short of that at 25.7 degrees, but represented a “significant” temperature for the area.

The mercury reached slightly lower levels in the south where a band of sea fog dampened things slightly, with Roche’s Point in Cork peaking at just 20.5 degrees.

Met Éireann meteorologist Gerry Murphy said for weather to be classified as a “heat wave” there must be five consecutive days of temperatures above 25 degrees.

A spokeswoman at Met Éireann said today will probably be a carbon copy of yesterday.

But there is an Atlantic front threatening to push inland by Saturday bringing a risk of rain.

“But what can often happen is that it gets delayed because it just can’t get through what is called a ‘blocking high’,” the spokeswoman said as a kind of consolation.