Students on Thunberg: ‘At the end of the day it is our planet’ 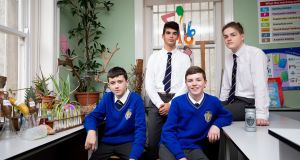 Sixteen-year-old Swedish activist Greta Thunberg might be just one individual but for students attending Dublin’s O’Connell Secondary School, she is not alone.

Her message on climate change broadcast from New York City last week, when she led the Global Climate Strike, and her comments delivered to the assembled leaders at the United Nations on Monday resonated deeply with students.

“She is inspirational when you think of what she can do at such an age,” said Arseniy Kuznelovs (16).

“I’ve seen a few talks of hers and she mentioned how much one kid can do. I think that is an accurate statement – can you imagine what all of us could do if we teamed up?”

Fifth-year student Bepo Jacan, who is also 16, said: “I remember when she said the Earth was on fire. I really liked that point. When we think of the Amazon rain forest and everything that has happened there over the last few months, we need to do something or the Earth is going to die. Everything is going the wrong way currently. But she is really making a difference especially when it comes to the younger generation.”

Teenagers see life through a different lens and students at the 191-year-old school on North Richmond Street agreed Thunberg’s age should not cloud opinions.

“It is different when you get an opinion from another age group who see things differently and not like adults,” says Arseniy.

“They shouldn’t really be devaluing anything she says – they should be taking it into account like any other person.”

The youngest of the students The Irish Times spoke to, 13-year-old McKenzie O’Connor, agreed, and while he thought the younger generation should be listened to more “they think young people are irresponsible”, he said.

Tighe O’Driscoll (14), a second-year student, has helped plan an aquaponic garden for the school and, for him, no change is too small.

“Of course there are changes people can make,” he said. “For instance, we bring in our own reusable water bottles which stops us from buying plastic water bottles. It’s the small things. It’s not going to save the planet – but it is us doing our part.”

A year ago Thunberg was sitting outside a school in Sweden and just 12 months later she was at the head of a social movement that has held marches in 150 countries across the world.

“I think what she has done is a great thing,” said Tighe. “From just one girl on her own to attracting millions of views and millions of people around the world trying to support her.

“And, at the end of the day, it is our planet and we should be the ones that should save it.”