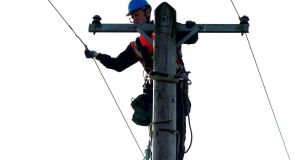 ESB Networks has now restored power to over 370,000 people who suffered an outage following Ophelia.

Work is continuing on Monday to restore power to about 2,000 homes, farms and businesses which are still without electricity a week after ex-hurricane Ophelia hit the country.

The restoration work was hampered by Storm Brian, which brought heavy rain and high winds over the weekend. It is understood the majority of the power outages are from Ophelia but a small number occurred over the weekend due to Storm Brian but most faults are located in rural areas.

Despite the assistance of repair crews from Northern Ireland and France, it is expected to be the middle of this week before all repair work is completed.

ESB Networks has now restored power to over 370,000 people who suffered an outage following Ophelia.

Bernadine Moloney, the ESB’s head of corporate affairs told RTÉ’s Morning Ireland that most of these customers are in rural areas.

Ms Maloney acknowledged the difficulties being faced by some people and thanked the public for the support shown to crews working long hours in difficult circumstances.

“The warmth shown to the crews by communities has really lifted their spirits,” she said.

Ms Moloney said that crews had made a “tremendous” amount of progress over the weekend, but cautioned that some individual homes may be without power until Tuesday.

The company reminded people not to approach fallen power lines but to report them on 1850 372 999.

There are 65 people remaining without a water supply as a result of Storm Ophelia. This is down from a peak of 109,000 in the immediate aftermath of the storm.

The two remaining areas are both in Co Waterford (Deelish and Lyranearla) and there are alternative water supplies in place.

Eir has said that the number of customers without phone and internet connections has been reduced to 10,000 with this number suspected to decrease further later on Monday.