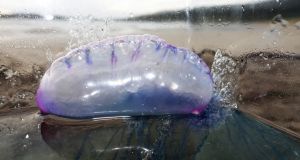 Southerly winds forecast for the next seven days are expected to sweep more Portuguese men o’war onto the Atlantic seaboard, amid continued warnings about their extremely dangerous sting.

Fish farmers, sea swimmers, surfers and beach walkers have been advised to exercise caution on sighting the marine animals, which are not jellyfish but siphonophores or colonies of zooids.

First recorded almost a month ago, most of the purple/pink animals with a balloon form resembling a Cornish pastie are being stranded on the Cork and Kerry coasts, according to NUI Galway Ryan Institute scientist Dr Tom Doyle.

He has had reports of about 700 since early September in locations from Cork to Donegal. This may not be a record yet, as large numbers were also stranded here in the mid 1940s and in 1968 when 400 were counted in one day alone by the Cape Clear island bird observatory, he said.

Northerly winds on Saturday are expected to back southerly again by Sunday and remain variable from the south until at least October 8th.

More frequent storms, due to climate change, may be a major factor, Dr Doyle said.

He said that while the animals will die after stranding, the sting can be active for days after, so remains should not be touched. “Each tentacle can carry hundreds of thousands nematocysts or stinging capsules, which are just 10 to 20 micons in size and contain a tiny little protective harpoon with venom,” Dr Doyle said.

He and his team are researching new treatments for stings, and are also researching abundance of this species and of jellyfish as part of an Environmental Protection Agency-funded project. They are appealing for reports on a Facebook page, Big Jellyfish Hunt.

IFA aquaculture chief executive Richie Flynn said while fish farmers were on alert, the main risk to finfish and shellfish farms was from small jellyfish and algal blooms.