Boomtime estate that hit the rocks, financially and structurally

Defects remain in original complex at Carrickmines Green despite repairs 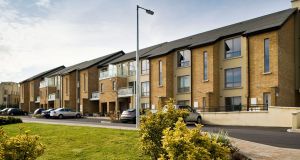 Carrickmines Green: About 180 homes have now been finished, mostly apartments in four- and five- storey blocks, with a number of three-storey terraced houses.

Carrickmines Green first hit the headlines in November 2005 when homes were offered for sale from just under the €300,000 mark to more than €740,000, just as its developer, Alan Hanly of Laragan Developments, was breaking ground.

The estate was one of the first under construction in the newly emerging suburb of Carrickmines, close to Foxrock and Stepaside at the foot of the Dublin mountains, just outside the M50 ring.

Much was made of the “picturesque backdrop” of the mountains and access to golf and tennis clubs, as well as the potential of a future Luas stop with the promised extension of the line from St Stephen’s Green. Eager buyers laid out deposits of up to €20,000 to secure their new homes.

Ground to a halt

Work did get under way and some homes were completed, but by 2008 construction had ground to a halt. However, the estate didn’t make the news again until mid-2009 when Laragan went bust.

Some buyers had at this point moved into their homes, but dozens more who had paid deposits were told they were at the back of the creditors’ queue and their €20,000 was now worth €200.

Carrickmines Green had become a ghost estate, or as they are officially called an “unfinished housing development”, with apartment owners living in a half-finished building site.

Receiver Des Gibney of McStay Luby stepped in to finish the half-built blocks using funding provided by Nama and after a hiatus work resumed on site.

Not long after this owners began to become concerned about structural problems with the development. Pooling of water throughout the estate and flooding of the basement car parks had initially been put down to the fact that the estate was still a building site, but as blocks reached completion the water didn’t disappear.

In 2012 a structural survey was commissioned from Val O’Brien & Associates and it recommended measures to deal with the water ingress, damp and flooding. Its report noted general fire safety issues, but did not involve opening up of the internal areas of the buildings.

In 2015 a fire broke out in the basement car park of a block not yet built at the time. The fire was believed to be an arson attack. However, a fire safety audit was undertaken that same year by fire safety consultancy FCC of the entire complex, which recommended extensive repairs to the fire-stopping materials.

Some works to fix the fire and structural issues were undertaken last year. However, a follow-up report by Scott Murphy Chartered Building Surveyors found that defects remain.

About 180 homes have now been finished, mostly apartments in four- and five- storey blocks, with a number of three-storey terraced houses. However, the estate as originally planned was considerably larger and Mr Gibney is overseeing the development of 57 more homes – semi-detached houses which are due for completion next January.

It is the owners’ view that the defects in the original complex should be fixed by the receiver before more building takes place.