Smaller apartments for ‘hipsters’ to be permitted in Dublin 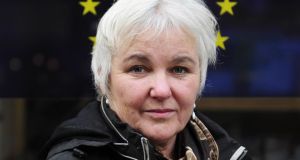 Brid Smith from People Before Profit: said people were no longer in a position to move house as their family grew and that even ‘hipsters’ were entitled to good quality housing. Photograph: Aidan Crawley

Plans to allow the construction of apartments that are almost 20 per cent smaller than the current minimum size in Dublin will go on public display in the coming weeks.

City councillors agreed by 27 votes to 23 yesterday to allow proposals for a new category of “studio” apartments to be included in the draft city development plan for 2016-2022.

The studios would be 45sq m (484sq ft), as against the current minimum size of 55sq m (592sq ft), but could be built only in certain circumstances. They would be permitted only in schemes of more than 100 apartments that have communal facilities such as common rooms and gyms and could make up just 7.5 per cent of the overall complex.

The complexes, which can be in the inner city or docklands only, must be for renters, not owner occupiers, and must be in single ownership for at least 20 years, during which time they cannot be sold off piecemeal.

People Before Profit councillor Bríd Smith said people were no longer in a position to move house as their family grew and that even “hipsters” were entitled to good quality housing.

Fianna Fáil councillor Jim O’Callaghan said he hadn’t been provided with any evidence that a reduction in size would result in a corresponding reduction in cost. “I want a city built for people, not battery hens.”

Sinn Féin’s Chris Andrews said the council needed to aspire to “raising not lowering the bar”.

Councillors also agreed to include proposals which would increase the maximum height of “low-rise” apartment blocks permitted in the city by 50 per cent.

Previously the height of blocks was expressed through the number of storeys. Low-rise, which covers most of the city centre, was set at six storeys for apartments. Residential ceiling heights meant that apartment blocks would not reach more than 19m, but office blocks, with higher ceilings could reach 28m. The new plan would set the maximum height for low rise apartments at 28m.

Mr Perry described the change as “an underhand attempt to increase the height in the city”.

The draft will go on public display from October 1st for 10 weeks.