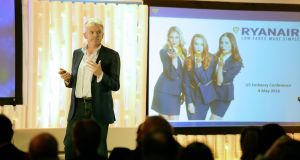 Ryanair boss Michael O’Leary has said cyclists should be “taken out and shot” and that Dublin needs better commuter solutions than merely increasing the number of bikes.

In a broadside on Dublin City Council, which has been promoting bicycles as a form of transport in the city, Mr O’Leary said the last thing the capital needs is an increase in cycling.

Mr O’Leary was speaking in response to a talk given by the local authority’s Smart City programme manager Jamie Cudden at the US embassy’s Creative Minds: Creative Disruption economic conference on Wednesday.

Mr Cudden had said there was a strong response from start-up companies to a recently closed €100,000 fund competition seeking approaches to increase the level of cycling in Dublin.

However, before addressing the conference on the future of the aviation industry, Mr O’Leary set his sights on grounded transportation, balking at the prospect of a growing cycling community and attacking Dublin City Council for failing to facilitate drivers.

“I hate to pick on Dublin City Council but s**t they’re here and they deserve a slapping,” he said.

“I listened with undue pessimism to the guy representing smarter Dublin.

“That’s all we need in Dublin going forward is more bloomin’ bicycles. In a country where it rains about 250 days a year, the way forward in Dublin is: more bicycles.”

Mr O’Leary joked of a future city in which people lived in caves designed by the council.

“Traffic won’t work, there is nowhere to park the cars and yet this is the smarter way forward,” he said.

“We should take the cyclists out and shoot them. We should actually create a city that works given that this is a low-rise, broadly based city and I speak as one of the commuters who commutes on a daily basis from Mullingar [in Co Westmeath].”

Mr O’Leary accquired a taxi licence in 2003 for trips between his home in Mullingar and Dublin Airport, where Ryanair has its head office.

Mr O’Leary made the company behind his taxi unlimited in 2013. As a result, he does not have to file publicly available accounts every year with the Companies Registration Office.

When asked if Mr O’Leary still uses his personal taxi, a spokeswoman said: “We do not comment on Michael’s personal affairs.”

Even if cycling was an option for him, the airline chief said it wouldn’t be a form of transport he would choose.

“I want to drive and I expect Dublin city to come up with a smarter way for me to get around Dublin and be able to park my car somewhere in the middle of Dublin without it being dug up every six weeks so we can some other new fabby non-sustainable public transport solution whether it’s the Luas - on the days when the Luas isn’t on strike - replacing the buses.”

Cycling has grown in popularity over recent years, with a 10 per cent rise in people cycling to work or school, according to the Central Statistics Office.

Road Safety Authority figures for 2015 show that cyclists make up about 2 per cent of traffic on Irish roads, but account for up to 8 per cent of injuries,

In excess of 4.5 million journeys were taken on city bikes across the State last year and more than 75,000 people have subscribed to city bike initiatives since the first one was implemented in 2009.