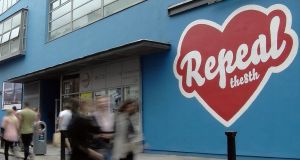 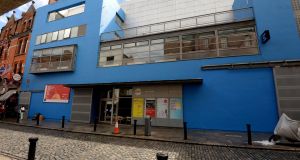 The Project Arts Centre on East Essex Street in Temple Bar on Monday afternoon – minus one mural. Photograph: Cyril Byrne

The “Repeal the 8th” mural on the front of Project Arts Centre in Dublin’s Temple Bar has been removed due to a planning violation.

The mural was created on Friday, July 8th by well-known Irish street artist Maser and refers to the campaign to repeal the Eighth Amendment of the Constitution, that acknowledges the right to life of the unborn. It was funded by The Hunreal Issues, a website aiming to politically mobilise women in Ireland.

The centre made the decision to paint over the mural after it received a warning notice from Dublin City Council Planning Department that the work is in violation of the Planning & Development Acts (2000-2015).

Project hope to be able to re-install the artwork as soon as possible according to artistic director Cian O’Brien who said they would be working through official channels with Maser and The HunReal Issues.

Mr O’Brien confirmed the warning from the council was based on the fact that the structure the mural was painted on was not a temporary one and on the claim that it changes the tone of the street and impacts on the area.

However, previous murals in the same space, including one campaigning for a Yes vote in last year’s marriage equality referendum received no warnings from the council according to Mr O’Brien.

“This artwork occurs in the context of many in the artistic programme,” said Mr O’Brien. “It is the first time Project has been presented with a planning notice for a painted artwork on the front of our current building.”

After consulting with planning experts, the group decided to apply for planning permission rather than applying to retain the piece due to potential legal costs.

“I in no way wish to censor or silence an artist; I respect the legal position that the DCC Planning Office is in and the parameters within which they are working.” Mr O’Brien said that should the planning application be rejected it could set a “dangerous precedent” for other such art works in the city.

The centre received 50 complaints and over 200 letters of support for the piece. An online petition in support of the mural was signed by more than 3,000 people in three days after it was established by The HunReal Issues.

The Pro Life Campaign responded on Monday afternoon, describing the behaviour of the centre as “absurd and unacceptable”.

“The right decision has been taken to remove this highly political mural which had everything to do with campaigning and nothing to do with art. The claims by some that its removal represents censorship are laughable. The Project Arts Centre should belong to everyone and not have such a close-minded attitude on what constitutes freedom of expression.”

Chair of the board of Project Arts Centre, Sarah Pierce acknowledged the “small minority who have voiced disapproval or dismay”, saying “it is a reminder that art matters”.

Previous warnings issued for unauthorised street art include Joe Caslin’s marriage equality mural on George’s Street which was the subject of a petition signed by 44,000 supporters. The biodegradable mural of two men embracing was not removed before it was eventually destroyed by weather conditions.